Needlework Tuesay - It's a sewing week 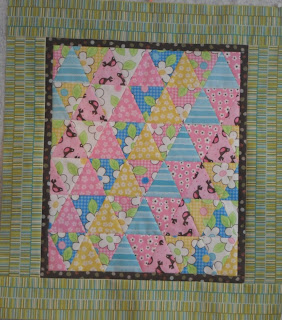 At the beginning of the year I kept insisting that I was going to sew this year.  I kept repeating it out loud for all to hear.  I don't really think I was believed.  I had to disprove the nay-syers.

Quite a while back I won a surpise assortment from Scott Hansen at Blue Nickel Studios.  Part of the package was a bunch of pieces from a layer cake.  They had been sitting on my sewing table for ages.  Finally I used my Marti Michell templates 16 (triangle) and 17 (half triangle) and cut them all up.  After what seemed ages of arranging and re-arranging, I came up with this portion of a thousand pyramd quilt.  First of all I was going to leave it at that point and make it into a cute doll quilt, but then I thought that it needed a bit more brown.  Sitting beside the brown was this really cool green and teal stripy fabric.  That settled the question of boarders.

I am planning to quilt it with loopy flowers similar to those shown on some of the central diamonds.

Yesterday I drove to my mother's and brought her back to visit for several days.First activity was my local quilt meeting.  We were working on a community project.  Sewing tops for the comforters that the Mennonite Central Committee uses for their relief work. 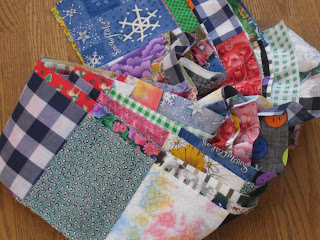 This is what my mother and I finished last evening. 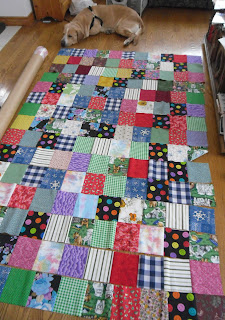 Here the rows are laid out and ready to be sewn together.  Fortunately that's all I have to do.  I will take it back to guild next month  and  someone else will layer and knot it.

I'd better get back to my sewing.


Marie, at Daisy's Book Journal has joined me to day with a needlework post.  She has included a picture of her finished afghan that we both did from the Bernat Knit along.
Posted by Heather at 15:31

Love your little quilt! I wouldn't attempt all those triangles so kuddos to you! The colors are perfect for spring!

Those two quilt tops look great. I like the way you placed all the colours in the pyramid quilt. Regards, Nessie

I love your work. Having absolutely no talent for quilting but a real love of quilts I'm i awe of what you do. I'm lucky enough to be related to a great quilter (my bother-in-law's grandmother-in-law) so I get my fix but I just love looking at other peoples quilts (okay, and drooling over them and wanting them for my own). Thanks for sharing.

Very nice work. Thanks for the mention.

Scott at the Blue Nickel said...

Love both of these quilts!!