Back in September of 2009 I told you about the pattern I had purchased to make a scarf for my son.  It's called the Groovy Scarf and it's by Iwona, a designer in Toronto, Ontario.  My niece wanted to knit a scarf when she arrived here in June and I pulled that pattern out for her.  She loved it.  When we were planning a scarf for her mother, the same pattern came to mind, only this time we worked together to knit it.  I knit the purple mesh and both of us knit the green strips.  Even though our tensions are way different, it didn't really matter.  We even switched part way through the green strips and would work each other's piece.  You can't tell in the end once they are woven into the mesh.  My son's is the red, white and black scarf, Michelle's is the black and blues scarf, and her mother's will be the purple and greens scarf.  Same pattern yet they give such a different impression. 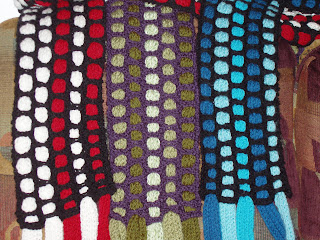 What good is a scarf without a hat.

In January of 2010 I showed you the little green hat I knit.  It's from a free pattern by Bernat.  Bernat Satin Cable Hat.  I have to admit that I found the hat just too small.  I had even knit it on 5.5mm needles instead of the required 5mm.  I adjusted the pattern this time in the following manner.  Cast on 86 stitches,  on the sixth row increase to 98 stitches.  Repeat the cable pattern 4 1/2 times instead of 3 1/2 times.  Then follow the decrease rows as written, you will need to add a knit 2 together at the end of the rows where that doesn't naturally occur.  The orange hat and the purple hat in the following picture were knit with the increased number of stitches.  No worries about running out of yarn.  The ball weights 100grams and the finished hat is about 60 grams.  That means you can also knit the hat using the variegated Satin, that ball is only 80 grams.  Visit next week and you'll see my variegated hat.

Michelle is modelling the hat and scarf for her mother.  My daughter is modelling the orange hat for Michelle's friend Laura, and the scarf I made for daughter some time ago out of a really funky yarn.  Wish that one hadn't been dis-continued. 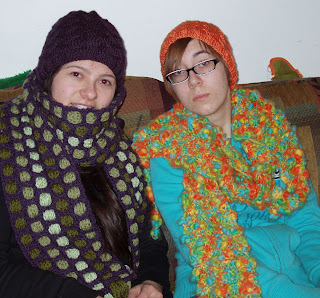 I really do keep my house warmer than would be suggested by this picture.  They are all bundled up for their view of the new season of Jersey Shores.

I have been doing some sewing, but the finished items went right into my niece's luggage without me taking a photo.  I am working on more of the same for her, and will be sure to take a pic before those ones go in the box with the hat and scarf for mailing.
Posted by Heather at 13:48