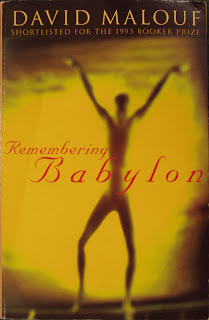 Gemmy Fairley had been working as a ship hand when he became ill and feverish.  His shipmates put him adrift on a raft rather than risk the health of the whole crew.  Fortunately for Gemmy, the raft washed ashore on a desolate area of Australia.  He was found by aborigines who he lived with for the next sixteen years.

One day while wondering with them, he spied some white men, whom he later sought out.  A family in the new community took him in and tried to help him re-integrate into English style daily life.  He had lost much of his earlier language skills and found it difficult to communicate.

What was happening with Gemmy was similar to what was happening with the English colonists.  Both were out of their element and trying to fit their old lives into their current location.  Gemmy had never had a 'good' nor 'safe' life and he didn't have the skills of how to live in a proper family.  The colonists were trying to recreate an English pastoral life in a totally foreign environment that was often hostile to their attempts.

I most enjoyed reading of Gemmy's life and his attempts to fit in anywhere.  He didn't find a safe place in England, not on the ship and even with the aborigines he was always an outsider.  He wasn't either a white fellow or a black fellow, he was something else.  I think perhaps that he was a lot of what was needed to for the transplanted English to survive in Australia, but that the whites refused to even consider the possibility.

This is my 19th novel for the Read, Remember, Recommend Fiction Challenge hosted by Bibliobabe.
Posted by Heather at 19:28

The book sounds interesting, but I don´t like that cover.

I'm with Dorte H, I'm not a fan of the cover. The book sounds interesting though.

I've been pondering this cover. It doesn't represent any particular occurance in the story. To me it looks like a man pulled thin, as though he is trying to hang on to the one culture he's been living in for 16 years, but he is also being drawn back into the one he knew as a child.

Interesting book...isn't it true for all immigrants-kind of a foot in each place.

I'm with Dorte on this one - I relly don't like the cover. Is it supposed to be a modern interpretation of aborigibnal art?

Anyway, best wies for 2011 to you and yours Heather.