My son is a vegetarian, thus I am always on the lookout for a recipe that will feed him well.  While searching my local news paper, I came across a dish with barley.  It sounded good, though I was concerned that he would turn his nose up at the spinach.  Turns out he liked it, a lot, he ate it three days in a row. 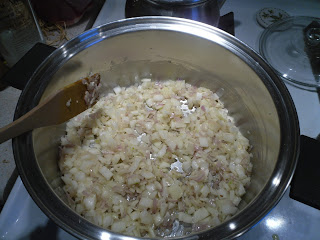 My mother was visiting this week and was happy to help prepare dinner.  She doesn't do a lot of cooking these days as she's been making dinner for the past 40 plus years and has had enough of that.  But to be my sous chef was just find.
First picture shows her sauteing the onions, shallots and garlic.  I realize that the shallots can be expensive, but if you can afford them, go ahead, they really do add to the flavours. 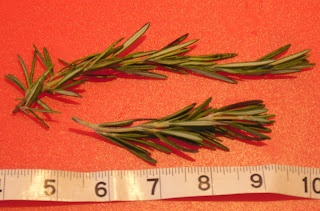 We had two discussion  of ingredients.  The first was arbitrarily resolved. The recipe called for two springs of fresh rosemary.  The amount shown in the next photo is what we decided upon.  I stripped the leaves from the woody stock and minced them finely.
I've not heard of Castelvetrano Olives and the recipe called for a half cup.  Both grocery stores I checked didn't have that variety.  A quick online search tells me that they are a lime green type olive.  I visited the blog GastronoMichael and he has a wonderful information page.  In place of the olives I put two teaspoons of capers.  Don't know how that changed the flavour; it was still a wonderfully flavourful dish. 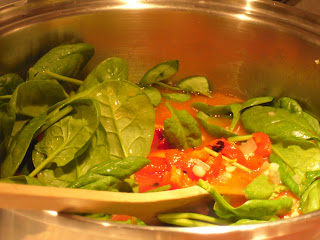 The final step is stirring  in 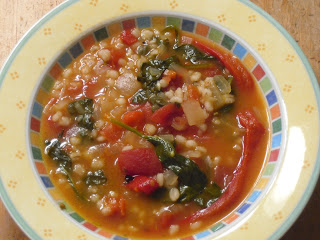 the spinach and a few other ingredients.  The spinach did look a bit out of place, but within a few minutes they had wilted and all was well.
Mediterranean Barley Vegetable Stew
2 tbsp olive oil
3 cloves garlic, minced
2 shallots, finely chapped
2 medium yellow onions, diced
796 ml (28 oz) can of chopped tomatoes
1 litre (4 cups) vegetable broth
2 springs fresh rosemary, minced
1 1/2 cup pearl barley
341 ml (12 oz) jar roasted red peppers, drained and cut into strips
5 oz fresh baby spinach
1/2 cup Castelvetrano olives, pitted and sliced
1 cup water
salt and ground black pepper to taste.
In a large sauce pan over medium heat, heat the olive oil.  Add the garlic, shallots and onions and saute until soft and translucent, about six to seven minutes.
Add the tomatoes, broth, rosemary and barley, then bring to a simmer.  Cover and continue to cook until the barley is tender, about 50 minutes, stirring occasionally to prevent sticking.  Stir in the roasted red peppers, baby spinach, olives and water.  Cook until the spinach is wilted, about two minutes.  Season with salt and black pepper.  Serves 6.
Oops, big, big, oops.  I just noticed as I was typing out the recipe that I had only added half a cup of pearl barley.  The newspaper print was hard to read, I didn't notice that it really asked for one and a half cups.  That explains why my dish was more like soup.
This recipe is from The Record,  Wednesday, January 12, 2011.
Posted by Heather at 13:11

Invite me to dinner! Please! This stew looks delicious. I'll have to try it. Thanks!

I'm coming over with Grandma! Yummmmmmm. I don't worry too much about the size of herb sprigs. Better to err on the small size and add more later.

This looks like a great hearty soup for all these cool days!

Oh, yummy and I have most the ingredients already. Barley stew here I come.

I am cooking some barley right now and I thought 'i would love to throw some olives in it' ..this recipe sounds just like what I am craving! It is the cold and the snow outside which makes it a perfect barley soup day.

This is looking really yummy -- and easy to make! Except that I don't have barley at hand, let alone pearl (?) barley