The Bluest Eye by Toni Morrison 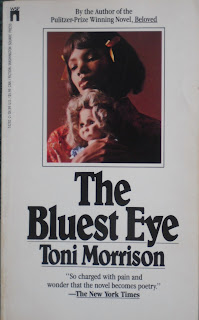 Eleven year olds shouldn't have a care in the world.  They should be free to play and dream.  Life never was like that for Pecola Breedlove.  She learned that it wasn't fair; that it was even less fair the darker your skin was, the darker your eyes were and the uglier your were perceived to be.  According to those around her, Pecola has all those things going for her.  She did have a glimmer of hope, a very unreasonable one.  She knew that the girls with blue eyes had the best of lives, heck, even the baby dolls had blue eyes and everyone loved them.  Pecola just knew that if she had blue eyes it would make all the difference in her life.

This was a difficult story to read.  Each of the characters started life with a reasonable shot at happiness.  But the smallest change in circumstances can have a huge impact that seem to magnify over time.   I wouldn't have thought that by injuring her foot, Pecola's mother's life would take such turns that would lead to a husband who would be the one to lead to Pecola's final break.

I can't say 'good book' nor 'bad book'; it's one of those books you need to read and decide for yourself.  In 2000, Oprah selected this for her book club.

This is my 26th book for the Read, Remember, Recommend fiction Challenge hosted by Rachelle at Bibliobabe.com.  Visit to enter to win a copy of either Parrot & Oliver in American by Peter Carey for adult readers  or Matched by Ally Condie for teen readers.
Posted by Heather at 10:33