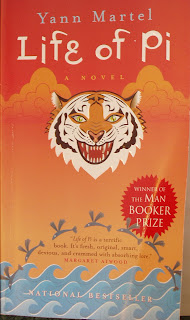 If you had told me at the start of this book that I was going to read a story about a man living in a life boat for almost a year with a full grown Bengal Tiger, and that I was going to believe every word of it, I would have thought you were crazy.  By the middle of the book, I found that I was so drawn into Pi's life, that I totally believed every word.  That this had truly happened and that Pi had in fact lived with this huge, ferocious tiger.  Even now, a few weeks later I am still convinced that this could have happened.
I am not the only reader to fall under Mr. Martel's spell.  Readers all over the world have been searching the internet for the location of the Pondicherry Zoo, and some in India and saying it would be a good move to start such a zoo.
I didn't think I would be so captivated by a story about a man and tiger, but the descriptions of taming the tiger held me motionless.  I listened to this as an audio book.  At times I would arrive at my destination and sit in my car listening for a few more minutes rather than turn off the oratation.  I was late for more than a few events as a result.
I particularly enjoyed the section of the book when young Pi was visiting three different religious leaders and learning about Hindu, Christian and Muslim beliefs.  I applaud Mr. Martel for his wonderful handling of this topic.  He presented each relgion in a such a caring way that I could clearly see why Pi was attacted to each.   A little more of this appoach in the real world could have profound positive impacts.
I listened to the unabridged audio version by HighBridge Company.  It was read by Jeff Woodman and  Alexander Marshall.  Length: 11 hours and 35 minutes.
Yann Martel's recent project has drawn to a close just this week.  Every other week for the past four years he has been sending a book to Stephen Harper, the Canadian Prime Minister, along with a letter explaining why he chose that particular book.  Now after 100 books, Mr. Martel feels it is time to move on.  There is a website for this project.  He also published a book last year which includes the letters he had been sending to the Prime Minister.  Unfortunately the Prime Minister did not once contact Mr. Martel about all these thoughtful gifts.
World Wildlife Fund for Tiger Conservation
New Face of Fiction 1996 - Random House

This is my 9th read for the Canadian Book Challenge hosted by John at The Book Mine Set .

This is my 23rd read for the Read, Remember, Recommend Fiction Challenge hosted by Bibliobabe.com
Posted by Heather at 14:14

This is one of my favorite books of all time! I'm so glad to hear you liked it. Thanks also for sharing Martel's progect....I'm off to check it out now!

Very nice review. This book has been lingering on my to-be-read shelf for far too long. In fact, I think I have two copies. I must get to it soon.

Too bad Mr. Harper didn't personally respond to Martel. I think a lot of people were hoping for something...anything.

Lovely review! I've heard of this book, but never really thought about reading it until now :)

What an interesting story about the writer and the prime minister. I think that if there is any group that needs to read some good literature, it is politicians!

This has been on my reading list for forever and I don't know why I haven't gotten to it yet. I like the idea of listening to it, I'm going to add this to my audio book list.

What a shame the Prime Minister never contacted Mr. Martel. I'm heading over to his website right now and want to take a look for his book about the project.