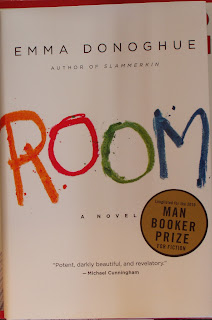 I wanted to end my review at the end of my second sentence, but decided that you might want to hear the why behind my statements.

This story is of Jack and his ma.  Jack is five and they live in Room.  Not a room, but Room.  Jack believes that it is the only room, there are no others.  He has seen tv, but everything there is not real, it's on a different planet.  He has never been outside Room; there is nothing outside.  He is too young to understand that his mother was abducted and raped and that he is the result.  She has chosen to raise him in ignorance of outside so that he will be content with his life.

I was captivated by this story.  It's not that it was exciting or glamorous or even brutal.  I had to know more about this little boy and how he could behave so normally under such bizarre circumstances.  I read in awe of this compact world that author Emma Donoghue had so convincing created.  There have been several instances where women have been held captive similar to this and I imagine that they must have constructed similar rules for their tiny worlds.

I can't say I loved this book, as it's not the type of story that inspires love.  Rather it is a compelling one that I found hard to put down.  It will stick with me for a long time.

Emma Donoghue's website
Trailer for Room, thanks to HarperCollins.

Read what Petty Witter at Pen and Paper thought about Room.
Also reviewed at My Novel Reviews

This is my eleventh read for the 4th Canadian Book Challenge hosted by John at The Book Mine Set.

This is book 25 for the Read, Remember, Recommend Fiction Challenge being hosted by Rachelle at Bibliobabe.com
Posted by Heather at 21:09

I agree. This book was fantastic. It deserved its Booker nomination.

I've just finished reading this and will review it early next week - I hope you don't mind me including a link.

I'm so nervous about reading this book but I know I must. Soon, I promise.

It's still on my TBR list. Must read before September because she's coming to Eden Mills (in case you needed more incentive to come)