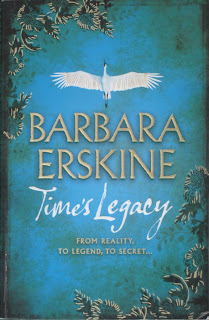 Reverend Abi Rutherford has just been hired as assistant curate of St. Hugh's parish in Cambridge.  She will be working closely with the Reverend Kieran Scott.  Within weeks of beginning her new position, Abi senses something unusual at the church.  She can hear singing and smell the burning of beeswax candles, even though the church is empty but for herself.  Unknown to Abi, Kieran can also sense these other timely parishioners and fears that they are an evil influence upon him.  He is hoping that Abi will be able to save him from them.  In his efforts to enlist her help, he makes a mess of everything and sends her running away, fearing for her own safety.

It didn't take many paragraphs for this story to wrap its arms around me and pull me right into it.  I had no choice but to keep reading.  I even sent my family away at one point and closed myself off in my room so that I could finish the book without further interruptions.

Author Barbara Erskine has skillfully set this story in two time periods; 25 AD and modern times.  Because she has used to completely different sets  of characters, I found it quite easy to jump between times yet maintain the flow of the plot.

I enjoyed the comparison of the Druid and Christian philosophies of healing and the power of prayer.  While the religions are very important to certain characters, this book wasn't about religion.  It is about truth.  The ancient character Mora wants to tell a story to those who follows and she uses the only medium open to her.  She hopes that one who follows will be able to decipher it and will know what to do with what is learned.

Book Trailer for Time's Legacy,  Thanks to HarperCollins.


I'd like to thank Petty Witter of the blog Pen and Paper for suggesting this author to me.  I'll definitely be checking out additional books by Barbara Erskine.
Posted by Heather at 08:00