Author and Crafty Chica Kathy Cano-Murillo has temporarily put aside her glitter glue gun and picked up her Swarovski Crystals to fashion a new and sparkly novel: Miss Scarlet's School of Patternless Sewing, due out today.  I am excited to be part of a tour sweeping the blogoverse. 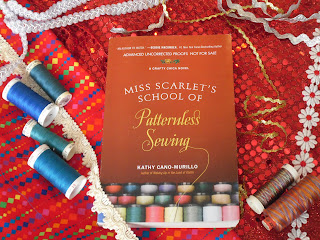 Scarlet Santana has just been accepted into a most prestigious design school led by the world famous Johnny Scissors.  Johnny also happens to be the nephew of Daisy, of Casa de la Flora, whom Scarlet has fashioned her world after.  She collects her designs, creates items styled after Daisy and even writes about her on her increasingly popular blog.  At one turn after another, Scarlet's world starts to loose it's shine.  Her boss goes back  on a promise to allow her to hold her classes in the design studio, her family appears not to support her career choice and most of her students cancel out of the class.    How's a girl to shine with all these set backs.
I was caught in the glitter of this story from the first pages. Having previously read Kathy's first novel Waking Up in the Land of Glitter and absolutely adoring it, I  expected no less from this book and wasn't dissappointed.

Scarlet is attempting to teach five students how to sew without sticking rigidly to a pattern.  She wants them to work 'outside the box' and take a chance.  I love this concept.  I want to work right along with them and make my duct tape body form.  It sounds like such a fun activity and a great way to get to know each other.

I want to tell you more about the role of patterns in this novel, but that would give away too much.  You'll have to read it for yourself  and find out the pattern you are using for your life.

As an added bonus, I am offering a set of Kathy's novels to one of my readers.  You could win a copy of Miss Scarlet's School of Patternless Sewing and one of Waking Up in the Land of Glitter.  If there are more than 30 entrants, I'll offer a second set of books.  To enter you must leave a comment and tell me of your favourite craft supply.  Be sure that I have a means of contacting you, ie: put your email in the comment.  You don't have to be a follower, but I'd love it if you decided to follow me.   Prize will be mailed directly from the publisher.  One prize per mailing address (you can't win the book set at more than one blog) Canada and United States only.

Thanks to Hachette Book Group for sending me a review copy and for generously supplying the prizes.

Check out what others are saying about this book:
Books and Needlepoint
Hey, I want to Read That
So Many Precious Books, So Little Time
Posted by Heather at 01:00

I would love to read these books! Since I am totally addicted to quilting by paper piecing,the one supply I can't live without is cheap copy paper!

right now I am reading the Niagra Falls book you wrote about earlier.

I just became a follower, too. Had no idea I wasn't one because I have you on my sidebar so I always visit from there.

Crossing my fingers to have good luck and win these books!

I am so glad to have found your blog. This book looks like fun. Sounds like it might have a little romance. Yeah!
My favorite craft supply is my new rotary cutter. It is small and goes on your finger. You use it like a pencil. Super cool.
johnslmatmsndotcom

I'm so excited to be part of this giveaway. I just loved this book. I want to do a craft project with Miss Scarlet and the girls from her class.

My favorite craft supply is Michael's. I would love to Scarlet's School of Patternless Sewing and Waking Up in the Land of Glitter :) *Thanks* for the giveaway!
theluckyladybug[at]gmail[dot]com

Gah! How to limit it down to *one* craft supply? I think I'm going to go with "paint", since that covers a lot of bases. The books sound like fun and I'll keep my fingers crossed in the hope of winning!

Hi Heather. I would love to win that book. I'm always looking for my next good read.

My favourite craft supply has to be my rotary cutter. I'm a quilter all the way!

My favourite craft supply would be yarn. I love knitting and find it relaxing...even complicated patterns.

I'd love to win these books. Thanks for the giveaway!

Dont count me in as I am overseas but these should be lovely to win! Thank you for coming over.

I've never seen a video trailer for a book! I love the music. My favorite crafting tool is Martha Stewart Glitter. So vibrant and colorful. Great giveaway!

I love your blog. I check it out every day.

My favourite craft supply is paper pulp. I'm a papermaker, and I sometimes tell people I have pulp in my veins! Papermakers love to wear all natural plant fibres, so that at any moment, they can strip their clothes off and throw it in a beater to make paper!

My favorite products to use are fimo clay, E6000 and my glue gun:) I can't just pick one!
msformaldehyde@gmail.com

I'd love to enter Heather. My favorite craft supply by far is yarn. I can never seem to have enough of it and it is currently taking up one corner of the basement. lol.

Egad! One favorite? It depends on what I'm doing though... *think*think* Okay, gonna have to go with paintbrushes or at least one good one. You can never go wrong with that....and if you use the other end of it, you can paint the eyes on little ceramic ornaments in a snap! (hehe...yeah, that's from experience there.. ^_^)

Thanks for sharing your reading adventure....and thanks for the chance! Happy reading....