If you haven't done it already, check out yesterday's review of Miss Scarlet's School of Patternless Sewing by Kathy Cano-Murillo and then enter the contest to win a copy of this book as well as her earlier one Waking Up in the Land of Glitter. 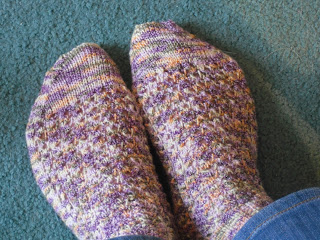 I know, I'm very late with my Tuesday post.  eeks, it's already dinner time on Wednesday.  I have a good reason.  I wanted to finish off my socks and graft the toes shut so I could model them for you.    I mostly stick to the pattern with the exception of stitching four extra rows before starting the heel, and I made the foot length 1/4 inch shorter than suggested.
Marie at Daisy's Book Journal has made great progress on her socks.  Foot one is finished and she is at the heel on the second. 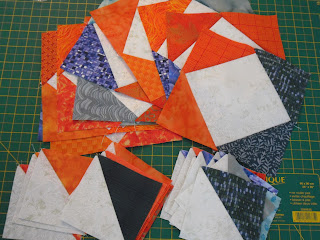 It didn't take long to get caught up on the mystery quilt that Gayle Bong is offering on her blog.  I sewed 12 square in a square blocks and some number of half square triangles.  The next step is posted; I'll be cutting some very unique shaped pieces.  Still debating whether to buy the Clearview ruler or not. 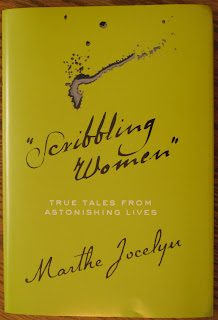 Now that I have a handle on Gayle's mystery, on to the next.  I received a copy of Scribbling Women by Marthe Jocelyn.  At the beginning of April, Tundra (the Publisher) will be hosting a blog tour and contest to celebrate the release of the book.  They suggested that we might want to do something special to accompany our review.
First I should tell you a bit about the book.  Women's writings have not always been equally valued as those of their male counterparts.  Some even complained about them as shown in this quote from the Tundra website:

In 1855, Nathaniel Hawthorne wrote to his publisher, complaining about the irritating fad of “scribbling women.” Whether they were written by professionals, by women who simply wanted to connect with others, or by those who wanted to leave a record of their lives, those “scribbles” are fascinating, informative, and instructive.

Quilting is often dismissed as just something that women do and very little value assigned to it.  A woman might spend 300 hours on a quilt and a man will walk up, look at it and expect to pay a mere $150.00 for it.  arg.  An idea jumped right out at me that I should make a quilt of words.

Now haven't I got your attention.  Come back next week and see what progress I have made on this new adventure.  Depending on what I get done, I'll reveal bits and pieces to you, but the final unveil will occur during the tour for Scribbling Women.

Yes, it is sad that quilting, weaving and many other arts are dismissed as craft or "women's work". On the plus side, many aboriginal stories and images survived colonialism for precisely that reason!

Your socks are awesome! You could say they knock my socks off. HAHAHAHAHAHAHA. Great job.

As for your mystery project, it sounds intriguing. I can't wait to see what you've come up with.

Great post, I love the idea of a quilt with words. My Brother-in-law's Mother-in-law (does that make her my Mother-in-law-in-law?) is a quilter and when we saw her over Thanksgiving last year we had a long discussion about the history of quilting and what value has been put on it.

I'll be on the look out for the Scribbling Women blog tour. This sounds like a must read for me.

I love your socks! I've never been brave enough to knit my own. Although with the weather we're having, I could sure use a pair!