When Will There be Good News by Kate Atkinson 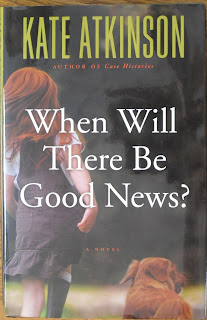 This is Jackson Brodie at his finest.  Well, actually it's not.  He is in fact rather broken and definitely not 'fine'.  It started out as a simple plan, take the train to the Yorkshire Dales, complete a small 'job' , and then take the train home before anyone noticed he was gone.  It didn't turn out anything like he planned.

Dr. Joanne Hunter's day didn't turn out as she planned either.  Thirty years earlier her mother, sister and baby brother had been murdered by a stranger, and today she learned that the murderer was now out of jail.

Reggie's goal for the day was to meet with her tutor, have a small dinner and get in lots of studying.  She did get two of three items accomplished before her world was turned on the end.

It didn't take many pages before I found myself captivated by Reggie.  She had so many stumbling blocks in her road of life, but she continued to pick herself up and and push forward.  Please Ms. Atkinson, don't leave me hanging, I need to know more about Reggie and how she fares in the future with her life and her studies.  Will she meet up with Detective Chief Inspector Louise Monroe again, or will it be with Jackson Brodie himself.

This third Jackson Brodie novel kept me on the edge of my seat reading.  I couldn't put it down till I knew that Reggie would be safe.  Oh yeah, I did have concern about Jackson and Louise, but they are adults and I had to give them credit that they would land on their feet, though perhaps I should worry a bit more about Jackson.

My reviews of the earlier books in this series:

Mystica has posted a review of Started Early Took my Dog, which is the 4th book in the series.

This is my 33rd book for the Read, Remember, Recommend Fiction Challenge.  Visit with Rachelle over a Bibliobabe and enter her monthly free book draw.
Posted by Heather at 13:51

As I am sure you have guessed, I also enjoyed this novel very much. Reggie is a great character, and one small thing I remember vividly is her description of the baby that looks like a starfish. The picture in my mind is so vivid I can´t help smiling every time I remember it :D

I also enjoyed the novel very much and it was my introduction to Jackson Brodie. Thank you for linking my second book review to this post. Much appreciated.