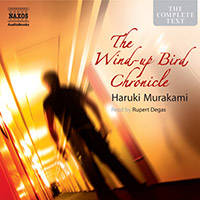 Toru Okada is in the midst of much more than a mid-life crisis.  He quit his legal job and has yet to search for a new position.  His wife, Kumiko, has been acting out of character and is fretting about their lost cat.  To top it all off, an unknown woman has been calling him on the phone and is making very suggestive conversation.

I listened to the Naxos Audiobook version read by Rupert Degas.  Great job on the various characters.  I had no trouble telling when characters changed.  At 26 hours, this is a very long story, though it seemed as though it was several novellas all linked together by common elements of flow and water.

Mr. Murakami has put together a most unlikely group of characters.  Right from the first, I didn't like Kumiko's brother , Noboru Wataya.  He didn't seem to have any human qualities.  More a logic machine than something alive.  May Kasahara was a gem.  She was that precocious teen that had a question about everything and wanted a true answer.  I looked forward to her appearance in the story.  I think that my favourite character was Lieutenant Mamiya.  When he told a story, I wanted to pull over to the side of the road and just listen.  I didn't want to have to pay attention to the traffic; I just wanted to listen.  His stories were fascinating and quite likely could have been true.

It was interesting that while Toru was trying to hang onto his marriage, all sorts of other females kept intruding into his life.  May,  the unusual physic sisters Malta and Creta and the mysterious Nutmeg.  With no attempt at enticing them, all these women seemed to flock toward him.  Why?

All in all, I found this an unusual book.  It kept coming back to 'flow'.  That un-resolved issues in Toru's life had interrupted his 'flow' and that until he corrected them, his life would not be settled.  I would have had a hard time reading a paper version of this book.  It wasn't something I could listen to in huge chunks of time, but rather for shorter periods, with lots of time to digest what had happened in the various chapters.  If you have tried to read the book and found it hard to stick with, give the audio book a try in smaller bits.  It worked for me.

Winner of the 1995 Yomiuri Literary Prize

Additional Reviews of this book can be found at the following sites:
Distant Heartbeats
Mystica

This is my 30th selection for the Read, Remember, Recommend Fiction Challenge hosted by Rachelle of Bibliobabe.com.  Visit Bibliobabe.com to enter her free monthly book draw.
Posted by Heather at 21:40

I did find it hard when I read it possibly hardest of his books I m just reading pinball1973 at moment ,all the best stu

Hmm, your review made me think. I don't know if I would have selected this book but now I think I'll add it to my with list. I think the audio is probably a good idea. I'll remember the idea of listening in short bursts.

Hmm, not too sure I'd enjoy this but thanks for mentioning it. At 26 hours in length I wonder how big the book must be.

Ps Have you heard about the pattern to knit the royal wedding? If not then you might be interested/find this post funny

I purchased this book from Audible simply because the narrator is Rupert Degas. But as much as I loved the narration, I just could not get into the book. I couldn't find any reason to care about anyone in the book, and the story wasn't terribly interesting (at least as far as I listened - maybe three or four hours?). Disappointing, but there are just too many other books out there that I'm dying to read! I'm glad it worked better for you. :-)

I'm going to look this book up on Barnes & Noble, it looks like the type of book that should be read as a traditional paperback rather than audio or kindle. Thanks.