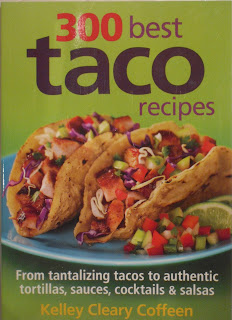 After more than forty years of eating the same old sandwiches, I was ready for a change.  When I saw that Kelley Cleary Coffeen had out a new cookbook, 300 Best Taco Recipes: From tantalizing tacos to authentic tortillas, sauces, cocktails & salsas, I thought that I might have found my solution.  It didn't take much to convince my family to join me for a March Break Taco extravaganza in our kitchen.  For the next two weeks, we ate a new variety of taco almost every day.
When my daughter had her birthday party, guess what we served?  Tacos of course.  They were a hit. 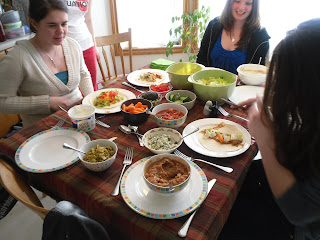 This cookbook has a dish for almost every type of eater including vegetarians, gluten and lactose intolerant people.  We chose to use flour tortillas for all our dishes, though corn tortillas are suggested many times, as well, recipes are included so that you can make both type of tortillas on your own.  If you prefer not to use the wrap, most dishes would work well served on a bed of greens.
The introductory section of the book includes a history of tacos, followed by a details discussion of many of the ingredients and equipment used in making tacos, both authentic Mexican as well as American versions.   The list of Ten Tips for Perfect Tacos was very helpful, including tip #6 - Don't Overstuff.  I'm still working at properly identifying my chiles.  A few times I bought sweet chiles thinking I was getting some heat.  I do wish that Ms. Coffeen has included a colour picture to help with identification.  Grocery store staff may be helpful, but they don't all know their chiles, as I found out.
The remainder of the book is divided by main ingredient: Chicken and Turkey, Beef, Pork and Lamb, Fish and Seafood, Vegetarian, Salsas, Relishes and Sauces, Dessert Tacos, and Cocktails.  Each recipe includes all the information you need to make that dish.  Most also include tips regarding the dish such as how to speed up preparation by purchasing a pre-cooked chicken, buying extra meat and after cooking store it in pre-measured amounts in the freezer.  I found that these recipes are quite forgiving, in that you can easily substitute ingredients if you are unable to find the one requested.  We did use some store bought salsa as it was winter here and fresh tomatoes were quite expensive.  The fresh made salsa was much superior in every way; taste, texture, aroma, everything.  As I mentioned, we used store bought flour tortillas with each recipe, and they were wonderful.  I don't deep fry, so we didn't try any of those recipes, though I will admit, many of them sounded delicious.
If your only exposure to tacos has been those spicy ground beef, topped with shredded lettuce, bland salsa and shredded cheddar cheese that are available at fast food venues and from those boxed kits, then you are in for a tasty adventure.  For the most part, these recipes are quick and easy to make and you'll have dinner on the table in no time.  Don't be surprised when there are no leftovers.
Following are the recipes that we enjoyed.  We also made the Huevos Rancheros soft taco, but the picture was not very good.  As a dish, it was heavenly.  No more wimpy bacon and eggs for me, I want my egg wrapped in a soft tortillas with mild green salsa and a good handful of shredded cheddar cheese. 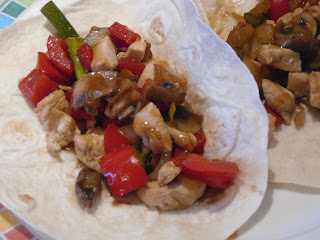 This was the first dish we tried.  It turned out perfectly.  An Asian inspired stir-fry with a tortilla instead of a bed of rice.  We used the extra sauce the next day on rice noodles. 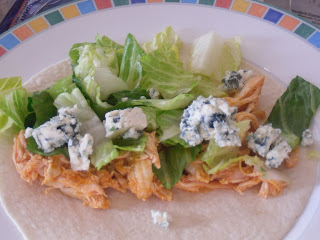 Definitely one of the most adventurous dishes.  This is the first time I have shredded chicken.  Let it cool a bit before you attempt this as it's rather hot on the fingers.  It really did taste just like chicken wings.  Use your favourite wing sauce.  The first taco I made I put chunks of blue cheese on top.  This was a bit too concentrated of flavour.  The next time I spread the cheese on the side of the tortillas and then 'built' my taco.  Much better. 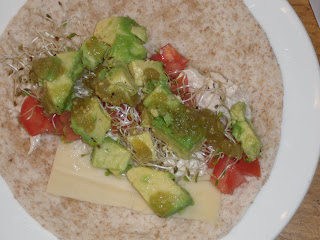 I didn't happen to have any leftover roast turkey, but a poached breast worked out well.  This was heavenly.  We added a bit of mild green salsa on top. 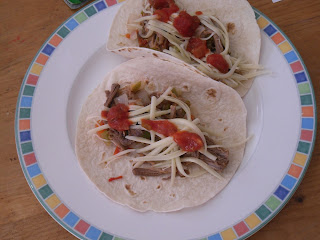 This dish would traditionally be made with dried meat that is reconstituted.  Kelley has simplified the process by using shredded beef.  This was our least favourite dish, though I think that had a lot to do with using the wrong chiles. Should have been spicier. 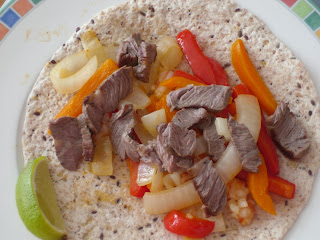 This dish wins hands down for being simple to make and extremely tasty.  I've not had shrimp and steak together previously and I sure have been missing out of something special.  It was worth clearing a foot of snow off the top of the barbecue.  A copy of the recipe for this dish will be found further down in this post. 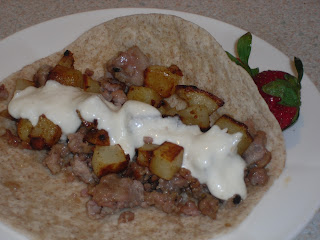 I'll admit to being skeptical about this dish.  I didn't find chorizo in my store and ended up with spicy Italian sausage.  This was so amazingly simple to make. We chose to top ours with Chile Cream Sauce.  My daughter had a few teen friends over and they devoured all within minutes. 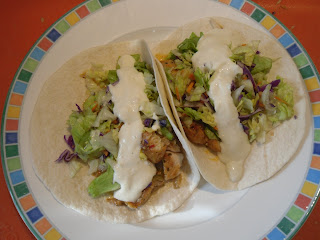 I bought my catfish already seasoned (tequila lime) and was ready to cook within minutes of arriving home from groceries.   To speed up preparation, we used a store bought salad mix and chopped it up a bit.

The Chile Cream sauce was simple to make and tasted great.  It also worked as a dip for cut vegetable and for potato chips. 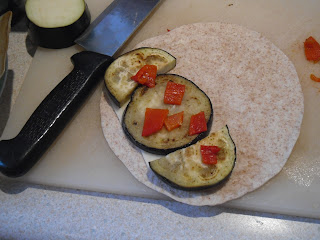 This may look sparse on the open tortilla, but eggplant is surprisingly filling. My kids weren't impressed with this dish, though hubby and I had no trouble finishing all that was left.  Next time I would use more roasted red pepper than was called for. 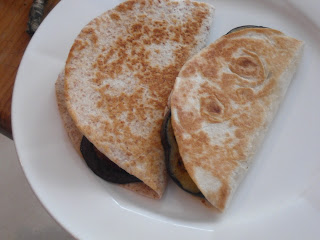 This photo shows the eggplant tacos once they have been folded shut and toasted in a frying pan.   We liked the suggestion of buttering the outside of the tortilla before putting it in the frying pan. 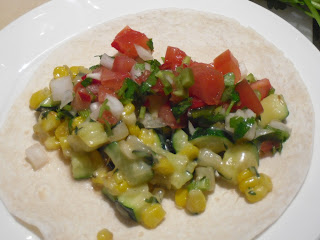 This is an adaptation of a traditional corn and squash casserole.  Summer squash wasn't available so we doubled the amount of zucchini as suggested.  This was topped by Pico De Gallo, a wonderful  fresh tomato salsa. 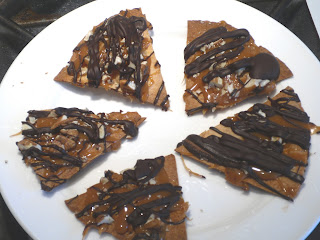 It was had to decide which dessert to try.  They all sounded so good.  I decided simple would win out.
Caramel, pecans and chocolate over toasted tortillas.  They lasted just long enough to take photos.

I hope that I have tempted you to give 300 Best Taco Recipes a try.  As I was writing this review, I had to take a break and make just one more recipe, Mexican Hash Tacos.  Another hit.

Instead of grilling the steak, place it on a broiler pan and broil 2 to 3 inches (5 to 7.5 cm) away from the heat or sear in a large cast-iron skillet over medium-high heat for 3 to 4 minutes per side.

1. Brush meat with 1 tbsp (15 mL) of the oil. Season with salt to taste. Grill for 3 to 4 minutes per side, depending on the thickness of the steak, until medium-rare and well browned on surface. Let stand for 5 minutes. Thinly slice meat across the grain.

2. In a large skillet, heat remaining 1 tbsp (15 mL) of oil over medium heat. Sauté shrimp, onion, red and orange bell peppers and salt and pepper to taste until peppers are tender-crisp, vegetables are slightly charred and shrimp is heated through, 10 to 12 minutes. 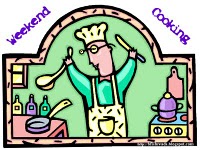 Your Taco looks good, with variety of spices and veggies added, and different style and mixtures. I sure make me want to have taco.

Thanks for sharing and visitng my food blog. I will try to join the food meme this saturday. thanks

This sounds like a great cookbook :) Thank you so much! Good to hear that I as a vegetarian have options too :)

These look delicious. My birthday is in a few weeks, do you want to stop by?
Ann

I had no idea you could make 300 different tacos. I'm ready to expand my horizons in this area. Your pictures are making me hungry. I could go for two weeks of tacos every day.

Those taco's look amazing! What a great book, would go over well in my house! LOL, yes, you are right, the taco's go well with my enchilada's! Have to take a look at that book :)

One taco looks as good as the next...I particularly like the sound of the eggplant/red pepper combo :)

Your photos are fabulous! I want to try them all...

Yum! They all look delicious.

Wow, Heather, you totally beat me with the amount of photos you posted! ;) I never really thought about tacos, but of course there are many ways to prepare them. Sounds like a really good cookbook. Love how it has options for allergic and vegetarian eaters!

sounds like a great cook book the buffalo chicken looks wonderful ,all the best sstu

Such a great post! Thanks for all of the pictures of the different tacos! Yummy!

Yum, you've inspired me to have a taco night this week. I can't wait.

I know just what you mean about sandwiches - I also tire of them so thanks for some alternatives.

Your photos have my stomach growling uncontrollably -- everything looks so fresh and delicious!

I don't eat tacos nearly enough - maybe once a year. After this post, my tummy is growling!

I love eggplant when it is done right. From your photo, it doesn't look like it was cooked long enough. I wonder how they had you prepare and cook it? Usually, for regular eggplant, you slice it, then salt each piece wait a good 30 minutes the wash and dry. It is then best grilled or pan fried. I prefer Japanese eggplant, there`s no need to salt them because they aren't bitter.