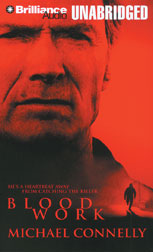 Just two month post transplant and Terry McCaleb is recovering on his boat which is moored in the Los Angeles Harbor.  Retired from his job with the FBI, Terry is under doctor's orders to do nothing other than rest and recover.  He finds this a reasonable task until the day a women comes to his boat pleading that he investigate the murder of her only sister.  When presented with the intimate details, Terry finds it hard to resist.

This is one of those stories that grabs onto the reader early on, and won't let go until the last line is read or listened too in my case.  To me, The murder of Gloria seemed like a case of being in the wrong place at the wrong time, it would never have occurred to me to think anything else.  McCaleb is one of those people who has a different sense of events and possibilities.  As an investigator, he comes across to the reader as very believable.  I loved this book.  Since I was listening to the audio version, I kept finding excuses to go out in my car and drive around, run errand and pick up the kids.  Am looking forward to listening to more of Michael Connelly's works.

The audiobook I listened to was an unabridged version by Brilliance Audio.  It was superbly read by Dick Hill (who I would listen to again at any time).  Length is 13 hours.
Thanks to Brilliance Audio for the cover image.
Posted by Heather at 17:55

This one sounds good. Perhaps I should put him on the list. Right now I am doing all I can to keep my TBR in control, though.

I have listened to a few of his book and they are just well done. Has you seen the Lincoln Lawyer movie yet?

I finished listening to The Lincoln Lawyer last week and loved it. Within minutes of starting it, I knew that Matthew McC was the perfect choice for the lawyer. I am looking forward to seeing the movie. With such a good book to work with, it would be hard not to come up with a wonderful movie version.

Hmm, sounds promising. The cover reminds me of a DVD cover somehow or other.