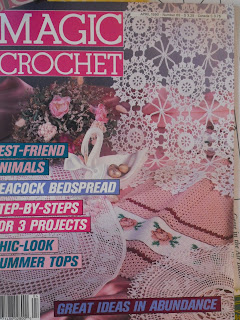 Thanks for visiting today for my Needlework Tuesday post. Have you been working on a needlework project this week?  Write a post about your project, being sure to include photos, and leave a comment.  I'll add a link further down in this post.

I have been quite inspired by the lovely doily that Sherrie at Just Books has been working on.  It was that bold colour of thread that first caught my attention.  After watching her progress over the past few weeks I decided that I would have to give it a try again.  I haven't tried to make a doily in over a decade.  Tension has always been a challenge with my crochet.

For several years I subscribed to Magic Crochet.  Don't know that I ever made any of the projects, but I recall drooling over them, especially those made in the more bold colours.  I have kept these magazines in my sewing studio and searched them out the other day.

It appears that the magazine ceased publication around 2005.   Issue 65 happened to be on the top of the stack and I found an easy pattern that used a thick thread.  It is called  "Aperitif set" by Chantal Chevallier.  I made the bottle mat.  I used a 1.25 mm hook.  I started with a slightly larger hook, 1.4mm, but it measured too large a gauge. 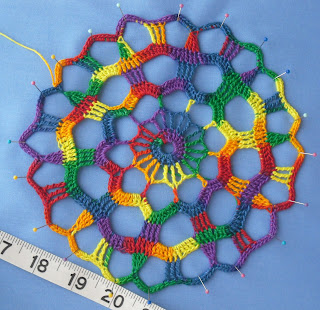 This second photo shows my finished project.  It only had eight rounds, so didn't take too long.  It measures 6 1/2 inches across.  I'm not sure how I'm supposed to finish it.  I pinned and steamed.  Do you still starch these?  I recall my grandmother doing that.  If so, do i soak the doily in liquid starch and pin it out to dry?  Next time I will draw a circle on scrap fabric and pin the doily to the edges to get a more accurate circle.

I am thrilled with my first re-attempt at making doilies.  I'm ready to move onto something a little bigger, but as Sherrie advised, the more the number of rounds, the longer each round takes. 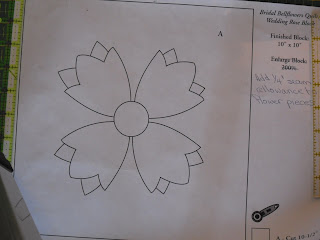 I didn't do any stitching on the Scribbling Women quilt, though I did write some follow-up emails and talk with a few people about it.  I need a few more contributions to complete the border.  Several should be on the way shortly and then I'll be back at it.

In the meantime, I have a challenge to work on that was issued by the president of my local guild.  She selected two blocks, "Bridal Bellflower" and "Geese in the Air" as well as a yellow dotted fabric.  The challenge is to use only five blocks to make a quilt.  We can make five of one or five of the other or some combination, but only five blocks. 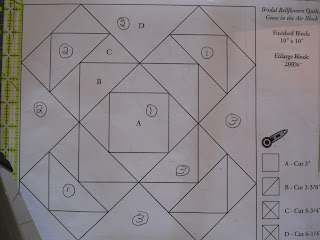 We can add a solid setting block, but no other block designs.  We must use the yellow fabric, but can add whatever additional fabrics we need.

I'll be re-installing Electric Quilt on my computer and coming up with a design.  I plan to take four blocks and set them touching and then turn them on point.   Next I am going to treat them as one large 24 inch block.  Instead of colouring each block the same, I am going to colour it as one block.  As for the fifth block, I am going to slash the pattern corner to corner to make four triangles and put them into setting triangles to square on the four centre blocks. 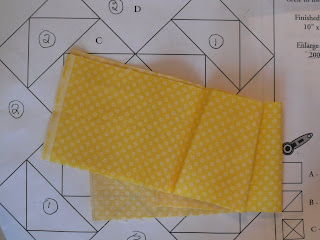 I hope I explained that properly, if not, I'll have photos next week.

I played with my colour wheel to try and find a fun colour set to work with .  My first thought was blue and yellow, but I figure that will be most popular with the other guild members.  Instead, I am going with black and white.  I have a fair assortment of that, and I think I even have some harlequin black and yellow that will work for backing.  My guild meeting is in two weeks, so I had better get moving on this.  Fortunately, I only need to get the top finished.  whew.

Thanks for joining me for my needlework update.  I love all the encouraging comments. What have my friends been stitching?  I'll add their links below as their posts go online.
Posted by Heather at 10:54

I love your doilym and don't think it is necessary to starch. I never did that.
My stole has come to a halt at the moment. The rows are getting longer and longer and it's summer and I can't bring myself to continuing. I hope the crochet mojo comes back soon.

I knit, crochet, and quilt vicariously through you so I'm loving these posts.

Love your doily, Heather!Great job! Can't wait to see your challenge quilt. Black and white with the yellow will be awesome.

Hi Heather,
Your doily is beautiful! Love the color you choose. As for starching, I don't. I just wash and lay them out and let them air dry. DON'T PUT THEM IN THE DRYER. Your challenge quilt is going to be awesome. Love the color choices. You've egged me on to get out my Bee Quilt and start working on it again. That's my Needlework Tuesday. Have a great day!

The colours of the rainbow, how pretty.