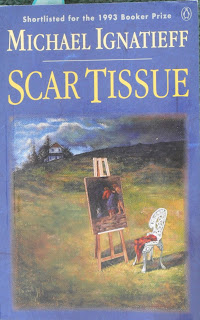 It's election day in Canada.  In preparation for this, I wanted to read a book by one of the party leaders.  The only one that found it's way to my hand was Scar Tissue by Michael Ignatieff leader of the Federal Liberal Party.

While he may be a very good and convincing author, it's unfortunate that he couldn't transfer this to his leadership.  At this hour, it's pretty clear that he is not going to become the leader of the opposition.

This book does not deal with politics at all, unless you want to consider family politics.  This is the story of how two sons deal with their mother's mental deterioration due to Alzheimer's.  This is a cruel ailment that slowly erodes those parts that make make up a person, their memories, emotions and even their habits.  The brothers deal with it in different ways.  One is a doctor and his is a very clinical approach.  He knows he can't save his mother, but hopes that by conducting his research into her case, he can learn and help spare others.  The other is an academic who continues to grasp at any bit of recognition his mother shows, even the barest glimmer.

This book rang very true to me.  For years I watched the changes in my grandfather, and while he would have moments where his memories would break through, they became very few in his last few weeks.  As with the brothers in this story, it was heartbreaking to watch my grandmother visit with him and he didn't recognize her.

I felt that this book was very well researched, not just from a medical standpoint, but also from the patients point of view.  Mr. Ignatieff carried on a lengthy correspondence with Maurice des Mazes who I will assume was living with Alzheimer's.

I look forward to reading further works by Michael Ignatieff.
Posted by Heather at 22:29

This sounds fascinating. Dave's mother has Alzheimer's and it is an awful disease. It steals the patient's dignity and it's so sad to watch. I will see if I can find a copy of this book. It would be interesting to see how others deal with it - even in fiction. If you are interested in this subject, I suggest Still Alice by Lisa Genova.

Also, my Needlework Tuesday post is up. It was an easy, short one this week. Thanks.

A party leader who writes fiction? Never heard about any politician in Denmark who writes anything but auto-biographical stuff. This one sounds good, but also tough.

IO read this at time it was in book and like you was touched by this book ,I remebr igatieff presenting tv here in uk used do a arts show shame he lost ,all the best stu