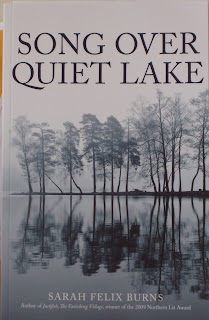 It's been a while since I've had a First Nations Friday post.  While this one doesn't quite fit my requirement of being written by a First Nations Author, I feel that since one of the characters is a Tlingit elder, it would be okay.

It is late 1990's and two very different women are preparing to gradutate from the University of British Columbia.  One, 82 year old Tlingit elderLydie Jim and the other, 20ish Sylvia Hardy.  They are from very different backgrounds and both with horrific events in their pasts which follow them to this day.  Their lifelong friendship began shortly after Sylvia was hired as a tutor for Lydie.

This story is told through several narrators including: Sylvia, her mother Miriam,  her boyfriend River, Lydie, and both her sons Mitchell and Jonah.  The final links in the story are supplied by an old priest lying in his death bed.

For the most part, I rather enjoyed this novel.  The concept of an elder and a young student befriending each other is quite believable.  They both needed and gained something from this relationship.  I was somewhat put off by the use of language.  No swearing.  It made sense to me that Lydie's english wasn't text book perfect, so missed articles and that was fine with me as she didn't learn english till she was at least twelve.  I didn't feel that Sylvia's language was up to that of a woman soon to graduate from university.    The first time she meets with Lydie for tutoring she is adament about keeping everything professional, yet her language made me think of a sixteen year old.  I kept reading and by the middle of the book this became less noticeable to me.

As the two women revealed the past events in their lives, I was surprised at my emotional response to them.  Yes, I cried more than a few times.  I was also bewildered at some of Sylvia's actions, particularly the night after finishing her final exams.  Perhaps that was a true action in some university social circles.

It is clearly shown in this book that we all are not just who we appear to be on the surface.  We all have back stories that follow us, it's how we chose to deal with them that makes us who we truly are inside.

For me, this book was all about Lydie.  I was initially attracted to it by the First Nation's character and wasn't dissappointed by her.

Author Sarah Felix Burns was inspired to create the character of Lydie after having met a Tlingit elder while she was studing at UBC.

Thank-you to Second Story Press for my review copy.
Posted by Heather at 08:00

I like characters with a back story, yet I am not sure I could accept the language. One of my pet peeves is when writers treat characters (e.g. children) as if they are younger and less smart than they should be.

I read a book called Astrid and Veronika about the friendship between an older and younger lady and just loved it! Tie that kind of story thread with the First Nations element and Song Over Quiet Lake sounds like a book for me!

This sounds like a fantastic book. I love your review. Your honesty about what you didn't care for made me feel like I will read this book now and push through it if that bothers me, too. Apparently the rest of the story makes it worth overlooking some flaws.

Thanks for stopping by my blog earlier and leaving a comment. I appreciate your thoughts!

I'm glad you enjoyed it more than I did. I felt that Lydie's story was sort of dropped along the way.