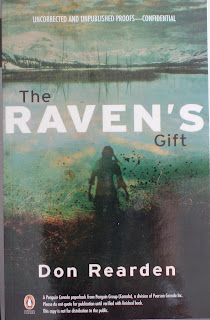 It should have been fairly straight forward.  John and his wife Anna both loved teaching, and moving to a remote village on the Kuskokwim River in Alaska was something they both wanted.  Anna seemed to settle right in, though John was hesitant, he felt caged in.  Once he started hunting with his neighbour, he began to regain his balance and made more of an effort to adapt to a new way of life.

Life was looking rosy until Anna came down with a fever; a fever that didn't go away.  In fact, many of the residents of their small community also became ill.  Then they started to die. Whole families perished.  John waited for help to come, but as Anna declined, he finally accepted that no help was coming.  He was alone in the tundra with no help.  Everyone else was in the same predicament.

Other than the first 30 or so pages, I read this book in one day.  I couldn't put it down.  Not only was I curious about this plague, but also I needed to know how John was going to survive in an environment that was still very foreign to him.  He knew so little about the culture and way of life of the Yup'ik people.  While they might be able to overcome these harsh turn of events, what chance did John have.

Author Don Rearden has thrown together three characters: John the school teacher, Rayne the blind twenty year old , and Maggie an Yup'ik elder.  None of them are equipped to survive on their own.  For them to effectively work together, they each will have  to teach as well as learn from the others.  I didn't know if John could do this.

I was surprised to learn that this is a debut novel from Mr. Reardon.  It was so well put together and with such depth to the characters that I wanted to search for his earlier novels.  I loved the careful details of the Yup'ik culture.  I highly recommend this book, not only to those who enjoy post-apocalyptic stories, but also to those interesting in history and culture.

I have decided to include this as a First Nations Friday post, even though the author is not  a member of the Yup'ik Nation.  This is also the first time that I have stepped outside of Canada.  Prior to reading The Raven's Gift, I hadn't heard of the Yup'ik and knew nothing of Alaska.  It has definitely whet my curiosity.

Additional information concerning the Yup'ik people can be found at Wikipedia.

Thank-you to Penguin Books for my review copy.
Posted by Heather at 08:00

Post-acopalyptic are not something I go for usually, but this one sounds very interesting. And the cover is very appealing.

Would the Yup'ik would consider themselves First Nations? Isn't that a Canadian term?

The first time I'd heard of the Yup'ik was because of Sarah Palin's husband :-s

I'm also not big on post-apocalyptic stories but there is something so interesting about this culture. I'm going to have to look for this one.