The Heaven Shop by Deborah Ellis 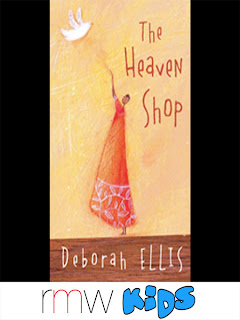 Binti is a young star on a Malawi radio show that deals with all sorts of important topics.  It turns out that the show is a good way of getting accurate information to their loyal viewers.One story line that receives rapt attention is that of AIDS.  While Binti is exceptional in her role, she is blind to the fact that her dear father is living with advanced AIDS.  She was too young to realize that her mother had passed away from the disease.

When her father dies, Binti and her siblings are sent to live with unknown relatives.  It is only then, that she learns that far too many people in her country don't understand the truth about AIDS; they think they can catch it from her even though she is not infected.

I listened to the audio book version.  Red by Jajube Mandela and the RMW Kids.  4 hours 7 minutes.

This story blew me away.  I was so touched by Binti's plight and it was even harder when I realized that there are millions of children in Africa that are in her same, and probably even worse situations.  Many of these children are being raised by their elderly grandmothers just as Binti came to be.  The grandmother did a good job of getting Binti to stop feeling sorry for herself and do something.  Do something to improve her lot and that of the other children taken in by her grandmother.

Thanks to RMW Kids Audio Books for the cover image.

Coteau Books for a brief bio of author Deborah Ellis.

For information on the Grandmothers Campaign, visit the Stephen Lewis Foundation.
Posted by Heather at 20:12