The Water Rat of Wanchai by Ian Hamilton 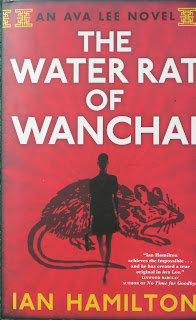 When I first received this book, I skimmed the back and saw forensic accountant and shipping firm and promptly put it on my bookshelf.  Months later I noted that author Ian Hamilton would be at my local store, Words Worth Books, in Waterloo, Ontario.  I was curious what the fuss was about.  Time to get the book off the shelf and start reading.

Five pages into the book, the start of chapter two, I knew I would have trouble putting this book down.  If I were to designed the perfect accounting action hero, it would have to be Ava Lee.  Not only is she a crack accountant, she is a master of several martial arts, in fact, she totally rocks.  While she is located in Toronto, Ontario, her senior and only partner, Uncle, lives in Hong Kong, where much of their business originates.  I have been raving about this imaginary woman for weeks now.  She is so calm, cool and calculating, and....

Mr. Hamilton certainly knows how to spin a tale and keep me guessing.  Each time I thought that Ava was going to wind up the case in the next few pages,  some unexpected twist would happen and the story would take a ninety degree turn.  It was interesting to follow Ava around the globe as she chased the money.  The descriptions of the locations, some exotic and others down right dangerous, were vivid.  I could almost smell the ocean lapping at the sea wall in Guyana.  I would never have thought that forensic accounting could be this exciting and dangerous at the same time.

This book is on the top of my recommended reading list.


Thanks to Anansi Books for my review copy.

On Tuesday July 19, 2011, Ian Hamilton was the guest speaker at Words Worth Books in Waterloo.  It was a wicked, hot night, though every seat in the house was filled.  Most in the audience had read his first book The Water Rat of Wanchai and were eager to start on his newest novel The Disciple of Las Vegas.

It was interesting to hear Ian's story of how he became a novelist.  He hadn't intended to, though I must say I am happy that he did.  I won't tell you how he became a novelist, I'll leave that for you to find out when you attend a reading of his.  Ian did tell us that he is working on the sixth Ava Lee novel and that there could be one or two more after that and possibly a spin off???.  It was exciting the hear that there is a film in the works of the first book.  I am curious who will be cast as Ava?  There are translations coming out in Dutch and German, though I don't have dates on that.

When he was asked about his approach to writing, Ian told us that he just sits down and writes. He doesn't plan it all out ahead of time on a story board. He lets the story develop in his head as he goes along.  He finds that it really helps him to talk the plot aloud as he goes.  Hearing it out loud helps him to find the holes in the story.

Ian Hamilton's third book, The Wild Beast of Wuhon, will be published by Anansi in February 2012.

This book will be published in the United Kingdom, New Zealand and Australia under the title: The Deadly Touch of the Tigress and will feature a different cover.   Thank-you to Little Brown Book Group UK for sending me a file of the cover image.
Posted by Heather at 08:00

Readings often pull books off my shelves too: when you've got so many to choose from, a public event can help you zone in on one book in particular out of the many lingering. And it sounds like this was a good match for you anyway!