What a Goddess Wants by Stephanie Julian 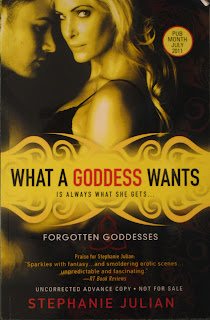 For a god or goddess to maintain their powers, they need followers.  After thousands of years, Tessa, more formally known as Thesan the Etruscan Goddess of the Dawn, has lost much of her powers.  She still maintains those related to her midwifery, but those of the dawn are mostly extinguished.

This has not stopped Charun from attempting to abduct Tessa in order to steal her remaining powers.  In order to protect herself, she has turned to Caligo, a legendary Cimmerian warrior.  As a warrior, Cal learned at a very young age to turn off his emotions.  It comes as a huge and potentially dangerous surprise to him that he is turned on by Tessa.

I enjoyed the multiple story lines: Cal exploring why he has feeling for Tessa, Tessa's dealing of her lose of power, and both of them struggling against Charun's forces.  Even though I learned little of the Etruscans and the Cimmerians, there was enough to explain each of their positions (within the realm of the Gods) and their relations to the other characters in the book. Yes, this is an erotic romance, but rest assured, that a lot of attention was paid to developing the main characters as well as the story lines.  I would definitely read additional works by Ms. Julian.

This is the first book in the Forgotten Goddesses series by Stephanie Julian.
2 How to Worship a Goddess  - due out December 2011
3 Goddess in the Middle  - due out June 2012

Thanks to Sourcebooks for my review copy.
The Obscure Goddess Online Directory
detailed page about Thesan