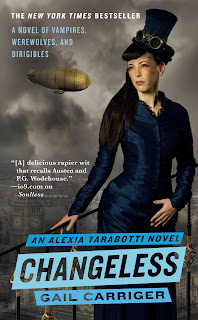 Something has happened in the heart of London.  The vampires and werewolves in the area have lost their supernatural abilities and the ghosts tethered there have disappeared, apparently exorcised.  Is it coincidence that this has happened at the same time that several troop ships from the east have returned to England.  whatever the cause, Alexia has been tasked by Queen Victoria to get to the bottom of it.
Lord and Lady Maccon have been married three months and are still enjoying their newlywed status when Conall is obliged to travel to his ancestral home in the Scottish highlands.  It isn't long till Alexia's investigation leads her to follow him.
As we learned in Soulless, the first book in this series, trouble seems to follow Alexia.  Marriage has not changed this aspect of her life.  Even when travelling in the confined environment of the dirigible, she has her intrigues.
Along with returning characters vampire Lord Akeldama and the wonderfully hatted Ivy Hisselpenny, we are  introduced to the enigmatic Madame Lefoux.  Dressed as a man, she is much more than the hat maker than she claims to be.  I imagine that someone such as her would have been a like a fresh breeze in such a rigid society.  All those rules of etiquette to be obeyed even when it is one's own family visiting.  Ivy is still a colourful character with her wild hats and gaily patterned outfits.  We also see a different side of her.  Previously I thought her fairly frivolous, though when she sees that Alexia is having a social challenge, she jumps right in and re-directs the conversation into another area, even though she has no idea what she is talking about.  A very funny scene that had me chuckling out loud.
Just as with Soulless, I loved this story.  It was definitely fun and entertaining, but at the same time but it does look at the roll of women in  society at that time.  I find it odd, that in a country where the queen is quite able to rule the empire, the majority of women are deemed just suitable to run their house staff and shop for pretty things.  Thanks to author Gail Carriger for making Alexia such a capable women, but not making her perfect in every aspect.
Books in The Parasol Protectorate:
Soulless
Changeless
Blameless
Heartless

Author Gail Carriger's website.
Thanks to Hachette Book
Group for the cover image.  Don't you just love the dress that Alexia is wearing.
Posted by Heather at 08:00

This book sounds like a great read, enjoyed your review!