Sunday was a wonderful day for the 23rd Eden Mills Writer's Festival.  Daughter and I were quite excited to be attending.  Me, because I  was looking forward personally meeting authors at the signing table, and daughter, she was going to be introducing author Richard Scrimger.
James Bartleman 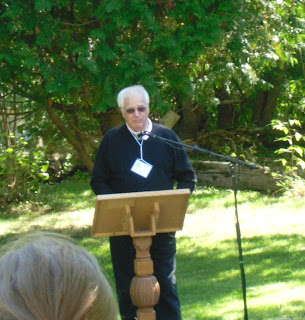 I'm sure I knew that James Bartleman had been Lieutenant-Governor of Ontario, what I didn't know was that he is an author.  His first novel, though not his first book, As Long as the Rivers Flow, was published this year.  The wording of the title is taken from the treaties that were signed many years ago with the Native Peoples.  IE: The land would be given to them for as long as the rivers flow.
This book deals with the devastating and lingering impacts of the abuses of the Residential Schools. In this book, he says that he is trying to personalize what is going on at the Northern reserves, the epidemic of suicides.


There is a podcast of  a conversation between himself and Shelagh Rogers of the CBC that he highly recommends.
Jill Murray 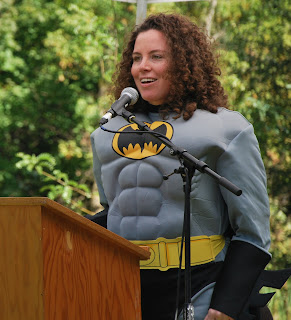 What's a writer to do when she'll be attending a big festival and hasn't the slightest idea what to wear?  She asks her Twitter followers.  Well, that explains why Jill is sporting a very cool Batman outfit.  Like Batman, her main character from Rhythm and Blues, Alya, is trying to find her true identity.  Jill says that sometimes you have to try on several before you find the right one.
Jill then read a selection from her book.  Alya has just heard that she has an audition and she is agrees to attend.  Moments later she is wondering what she has gotten herself into.  This self talk leads to a fantastic description of what he parents are like.  She didn't want to tell her parents about the audition and has sworn her brother to secrecy, so I am expecting horrid overbearing parents, but I find that I have been totally misled. 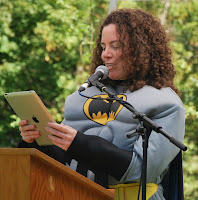 I thought it was cool that Jill read from her ipad instead of from a copy of her book. 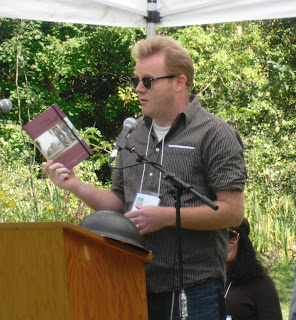 Today was the first time that the Festival had hosted a cartoonist.  This makes it a challenge to do a traditional reading.  First Scott set the scene for us, the writing scene that is.  He told us that a comic book starts with a written script.  Since it is very time consuming to draw the images, you don't want to do any more of those than you have to.  Instead, he writes a panel by panel script with details of setting, people and props, and then the dialogue.  Only after this is agreed upon with an editor/publisher does Scott do his drawings.  Within about 3 panels of the reading, I didn't even notice that this was any different from the usual type of reading.  Great success. 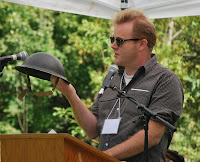 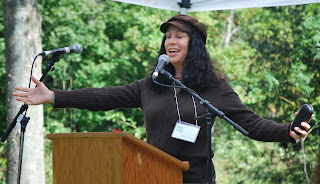 Interesting fact brought to our attention by the young  person who introduced her: Natale studied Landscape Architecture a the University of Guelph.  She also has a long standing interest in magic and was described as " A magician with words."

Not only a magician with words but with pen and ink, as in drawing.  Ever since reading Kurt Vonnegut's Breakfast of Champions, she has wanted to include her own drawings in a book. 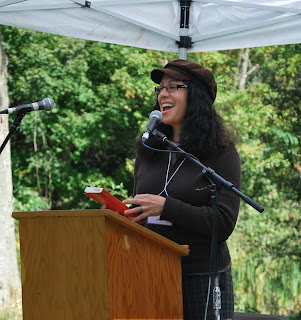 Natale read to us from her book Gravity Brings Me Down.  She choose a selection where her female lead character, Sioux Smith, has to go in to the boys bathroom to remove from graffiti.  Things don't go as planned.  The scene then dissolves into hilarity when a plain pair of enormous white briefs enter.  Nope, can't clarify that statement, you have to read the book to find out how they fit in.
Rene Meshake 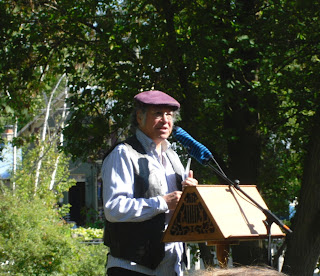 I have been waiting all year to hear Rene.  Last year at the Festival I spoke with his wife Joan for quite a while, but didn't get a chance to hear him read.

This year he read from his newest book The Copper Axe.  Rene is a survivor of the residential school system.  During his years at school his culture, language and family were denied him.  Like many, he had no idea that the Anishinaabe has a history of copper use, though he did wonder why his grandmother always told him stories of a metal axe.

Rene continues to encourage his cousins in the north to stay in school and to follow on their oral traditions of story telling and to use the skills that they have learned in the social medias to write books.  He has combined his paintings and Photo Shop to colourfully illustrate the story of The Copper Axe. 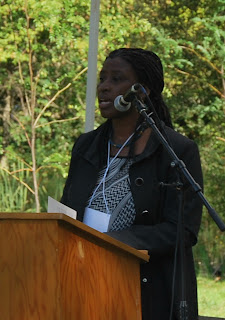 I hate to admit it, but I was still talking with Rene while Adwoa started reading.  Daughter was there talking pictures and insisted that I include her here.

Adwoa read from her latest book, Between Sisters, which is set in her home country of Ghana.  Daughter says this would be an awesome book to read. 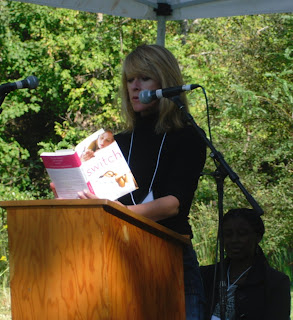 When I attend an author reading, the one thing I expect most, is to hear the author read and preferably from his or her latest book.  Tish took the podium and did exactly that; she opened her copy of Switch and read.

After hearing the opening pages, I now want to read more about Andrea Birch and find out about her thirty seven foster siblings. 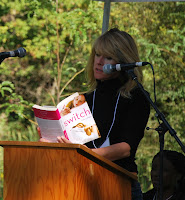 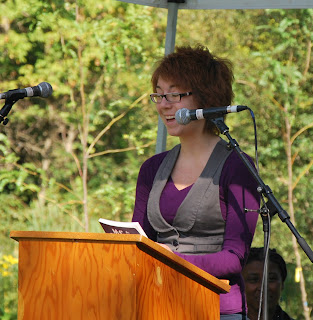 My daughter had the privilege of introducing Richard.  She took her task seriously, even writing to him and asking a variety of questions to get material.  She sure did learn more about him that you would usually learn about an author.  In case you are wondering, sour cream and bacon potato chips, and the licorice should be black. 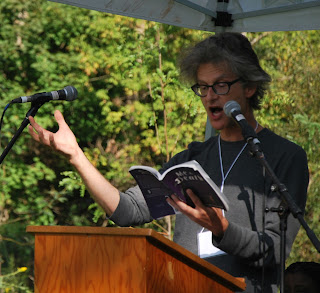 Prior to reading from his latest book, Me & Death, Richard had a few comments for the audience.  How to make a book attractive to a young reader: you have to find an interesting character and get him/her in trouble as soon as possible.  In this case, he made his character, Jim, a schmuck, not a nice guy.  He also offered advice to budding authors: that book you've been working on and editing for the past 8 years, put it away and let it rest, time to grown and get on with your next book.  Use that first book as a learning experience. 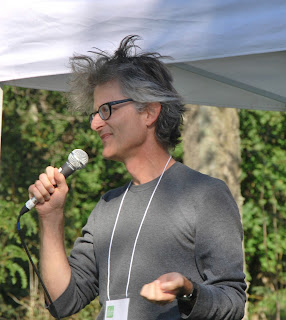 It didn't take long for Richard to have the audience rolling with laughter.  Not only is the book interesting, but he is such a high energy person that you couldn't help but get excited as well.
When asked how he got his hair into such a cool style, he said "Neglect."
Next week is Banned Book Week.  If you are looking for a great book to read and to kick the week off, the pick up Me & Death, it has been banned from some Catholic School Boards in Alberta, Canada due to the inclusion of a talking penis in one line of the story. 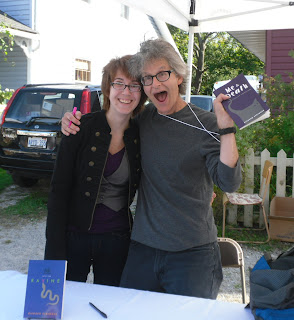 My daughter and Richard after he has signed her book.  Notice that daughter is wearing the same colours as those featured on the cover of the book.
Guy Gavriel Kay 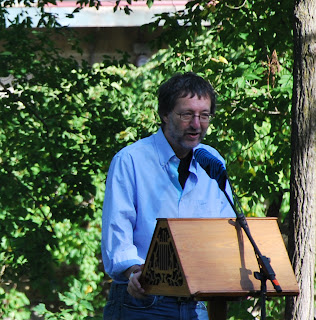 ﻿Mr. Kay was the last author reading that I attended at the Festival.  I haven't read any of his works, but I did borrow one from my sister's shelf and he graciously signed it for her.  Won't she be surprised.
In his introduction, he told us he had been described as "writes history with a quarter turn to the fantastic."  This has made me curious.  I will definitely have to peak into one of his books and find out why my sister raves about his work.
He read from his latest book, Under Heaven.
Thanks for joining me for my visit to the Eden Mills Writer's Festival.  On Saturday I plan to write about 'Publishers Way', an assortment of the authors and publishers who set up shop for the day along the main street of Eden Mills.
Posted by Heather at 19:55

Hey, I can almost convince myself that I was there too. Thanks Heather.

You get to such interesting places! I'm a big fan of James Bartelman because he arranged to have several shipments of books taken up north where books are scarce in the school libraries. We dropped a few off at the local OPP office a couple of years back and we've always been tickled to think that some kid is now reading them. Such a good initiative. How lucky you are to be able to attend such a festival. Thanks for taking us with you.

Great summary of the event! I really wish I could have been there. My daughter and I have enjoyed several of Natale Ghent's books and I have Gravity Brings You Down on my TBR shelf. I also love Guy Gavriel Kay -- one of my favourite writers.

Love the Batman costume-- glad she went with the retro gray.

And interesting to see a graphic novelist in the mix. Not only do I love that they're getting more and more accepted in literary circles-- but I'm also impressed that a graphic novelist can read to a crowd; I mean the others can simply rely on their text and read it as it, Scott's stories also depends on pictures and without a Proxima or something set up (looks like that would have been hard to do at this venue!) he's got a bigger challenge.