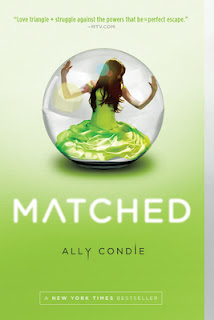 Cassia lives in the perfect Society.  She attends a school with the optimum of classes perfectly designed to provide her with the education she will need for her future employment.  After sufficient testing and observation, the Society selects the employment that she is most suited for.  Prepared foods, with Cassia's exact nutritional needs are delivered to her prior to each meal time.  The Society even functions to the extent that they select the perfect mate for each marriageable member, and when you time on earth is at it's end, they arrange a peaceful demise.

It is at Cassia's matching ceremony that she first notes that there might be something amiss in her very structured Society.  When reviewing the disk that should only contain biographical information about Xander, her perfect mate, she is shown the photograph of another young man, Ky Markham.  While and official tries to reassure Cassia that this was and error, she knows that her Society does not make errors and she begins to wonder what it might mean for her, for Xander and for Ky.

I was fascinated during my visit to this dystopian society.  At first, it did seem like a comfortable place to live, where you would be healthy and employed till your final days.  Then, like Cassia, I came to see that there really was no freedom.  Yes you could chose which activity to attend, as long as you did attend.  You couldn't enter anyone else's dwelling, I won't call it a home since Cassia never seemed to do anything there beyond eating dinner and sleeping.  She didn't play there or even relax, there were other places where that was to be done and where she was continually observed carrying out those activities.  Even at her house, she couldn't be sure that she wasn't being observed via the 'port'.

The Society had no outlet for creativity.  All poetry had been culled to an acceptable 100 poems, as had artwork and history.  arg, that is not freedom.

Finally, it was the constant fear that Cassia and her family lived in everyday that proved that there was something fundamentally wrong in this world.  Fear that their conversations would be overheard, fear that what they had done would be perceived as wrong, fear that they couldn't live up to the expectations of the Society.

Even with this variety of challenges to living in this Society, I can see that for many it would be perfect.  They could mindlessly live each day and not be concerned what might happen during the next.  The Society would have taken care of that for them.

This is the first book in a trilogy with the next book, Crossed, due out in November 2011.

I listened to the  unabridged audio version that was read by Kate Simses.  She did a wonderful job of portraying both the male and female characters.  I would definitely listen to other books read by her.  9 hours 49 minutes.  Penguin Audio.  Suitable for ages 14+.

Thanks to Penguin Audio for the use of the cover photo.
Posted by Heather at 08:00

Scary, the very thought of being able to mindlessly live each day fills me with dread.

I still have this on my wishlist but my library (in Europe) doesn't have it yet. I guess the book is too new. I always think it is a real shame that Europe is always behind like this. I can't read new titles unless I import them. Oh well I guess I have to wait for a few years...

This looks like a great book. I'm going to put it on my library list. Many of my 6th grade students are reading this now. They are enjoying it, but I do wonder if the content isn't a little over their heads.