No Proper Lady by Isabel Cooper 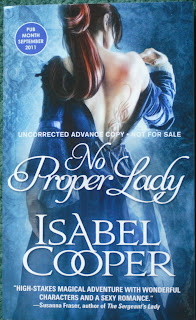 Joan's world is very ill and it's going to take more, much more, than a few simple spells and incantations to heal it.  It's going to take sending her back two hundred years to 1888 to effect the changes needed.

While wandering in the woods near his estate, Simon Grenville happens upon the long neglected standing stones he vaguely remembers from his youth.  As he approaches, he can feel an unearthly power building, radiating from the stones.  Moments later, Joan appears in the circle, poised for battle.

As it turns out, these two have a common adversary and they determine that they will work together to vanquish him.

This does pose certain challenges.  Joan comes from a broken, live by the skin of your teeth society.  She is essentially unaware of Victorian propriety and customs.  While she is a most proficient assassin, she hasn't the slightest idea of how to  approach her target.  It was interesting to see how different present day society and mannerisms are from 1888.  Clothing, manners, forms of speech, so much for Joan to learn for that she can fit in.  I felt that author Isabel Cooper did a good job at portraying the differences in women's positions in the two time periods.  She didn't imply that one was right and the other wrong, just that they were different.

I was surprised to learn that this is a debut novel.  There was enough depth to Joan and Simon that I felt comfortable with them and that I could almost anticipate their interaction.  I liked Simon's few friends that were introduced and am happy to hear that Isabel is working on a follow-up No Honest Woman. Eleanor makes for an interesting young woman.  She develops a substantial backbone through her involvements with Joan.  I wonder if it was there before?  How much was influenced by her brother's actions.  Hope to learn more of her in the next book.

I enjoyed this book.  Very entertaining.  I had to keep reading to find out how the romance could proceed in light of their serious quest and the societal restrictions.

Thank-you to Sourcebooks for my review copy.
Posted by Heather at 12:59