Sylvester or the Wicked Uncle by Georgette Heyer 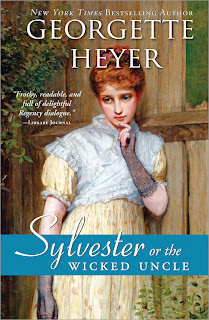 Sylvester, Duke of Salford, has decided that at the age of 28, it is time for him to marry.  During the past season he survey the eligible ladies of quality and has presented to his mother a list of the five most suitable.  While not surprised, she dismisses them all from consideration and suggests for consideration the daughter of her long deceased best friend.

Phoebe Marlow has been raised since an early age by her stepmother.  While a very efficient and strict mother, she is not nurturing nor loving.  Her main goal is to get Phoebe married off as quickly as possible so that she can concentrate on the most suitable matches for her own daughters.

Things take an interesting twist when Sylvester asks his godmother, who is also Phoebe's grandmother, about Phoebe. This sets in motion a chain of events involving a possible elopement, a broken leg, being socially ostracized, and finally an abduction.

Once Phoebe escaped from the stifling confines of her stepmother, she blossomed.  She no longer had to worry that she would be chastised for each and every word she said or action she committed.  I found the new Phoebe a very likable character.  Most Regency era women are written as too wimpy for me.  This one has spunk and speaks her mind.  On the other hand, Sylvester appears to be the haughty Duke that all expect him to be.  Somehow, throughout their misadventures, they each manage to pull out the best and the worst in each other.  This made for very amusing reading never knowing what to expect next.

The style of writing in this book put me very much in mind of Jane Austen's style.  Rich in detail and discussion of friends and family.  All were most proper in manners and for their concern of their position in society.  This is the second book that I have read by Georgette Heyer and leaves me wanting to read more.

There is a lengthy article about Ms. Heyer at Wikipedia.

Thank-you to Sourcebooks for my review copy and for the use of the cover image.
Posted by Heather at 08:00

There seems to be a lot of bloggers, well, blogging about this author at the moment. I like the sound of her books but am put off by the comparison with Jane Austen.

I have read about this Sylvester in another blog post today in another context (at the Carina blog). Is this the book with the guy with the boots?
G. Heyer pops up at every corner at the moment.

Unlike Tracy, I am tempted by the comparison with Jane Austen. Phoebe sounds like a character I´d enjoy getting to know.

Hi Rikki,
Yes, it is the same book. I had almost forgotten about the riotous scene of Sir Nugent and his precious boots.

Another Heyer I really need to pick up. Thanks for this fun review!

I'm in the midst of another Georgette Heyer book at the moment and I'm hooked. I noticed Amazon put many of her kindle editions at $1.99, which may account for the sudden interest. Having read some, I can totally understand why she has so many fans.