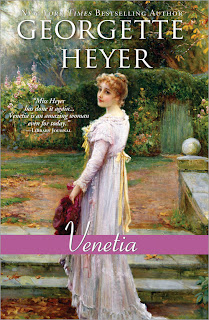 Venetia Lanyon has grown up in isolation on her family's  remote estate.  She doesn't feel as though she has missed out on much, after all, she has had the run of the property,  has visited with her friends in the local area and been allowed to ride her hearts content.  At twenty five she has accepted that it is most likely that she will not marry, but that she will set up a household with her younger brother Audrey, a scholar who is crippled in his hip.  For the past few years she has been running the estate for her elder brother Conway while he has been in France as a soldier.

All would have proceeded as planned had not Audrey fallen from his horse and been rescued by Lord Dameral, an absentee  neighbour he has never met.  Venetia quickly becomes intrigued by this mysterious man.  She has heard of him, that he is a rake and a womanizer of the worst kind.  Definitely not the type of man that a respectable lady would associate with.

Venetia is put in a difficult position.  Aubrey's injury requires him to remain at Lord Dameral's for his convalescence.  She insists on caring for him, but risks her reputation each time she enters his house without a suitable chaperon.

This is the first  book by Georgette Heyer that I have read.   I loved the amount of detail, both of the physical setting, but also of the relationships of the various characters.  Reading this novel gave me a feeling of peace and relaxation.  Once I was inside it's pages I felt immersed in Venetia's life, that I had all the time in the world to sit and enjoy every cup of tea she drank, every walk she took and even each of her visitors.

Even though I have read books by other authors set in this time period, I was still surprised at how controlling Venetia's neighbours were with regard to her life.  They assumed they knew better than her how she should conduct her life, whom she should marry and whom she must not associate with.  No one ever explained to her why. It was interesting to follow along with Venetia as she worked out what she would do with her life.  It seems to me, that the choices Venetia made were a direct result of her isolated upbringing.  She didn't give London society a chance as she had not been brought up there nor had she ever been led to believe that she would be properly introduced to that same society.  All she knew was the small area where she had been raised and those few people she had been allowed to interact with.  It appeared natural to me that she would fall in love with the first new man to enter her life.

The peaceful feeling I experienced while reading this book has stayed with me in the weeks since I finished it.  I hope that I will feel the same when I read  further books by Ms. Heyer.

Sylvester or the Wicked Uncle

Thanks to Sourcebooks for my review copy and for use of the cover image.
Posted by Heather at 08:00

Ok, you have convinced me, I'm definitely going to give this author a try.

This was a gorgeous read. So glad you liked it.

Again Georgette Heyer! I have been wanting to re-read her for months now. Thanks for the reminder!

I love the 3 Heyer books I've read so far. Adding this one to the list. Great review!