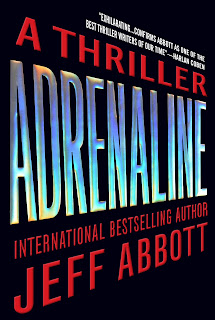 Parkour is a sport where the runner uses fast, efficient movements, and makes spur of the moment decisions to negotiate a route.  CIA agent Sam Capra has to use all these skills to find and try to save his pregnant wife Lucy.  She was abducted prior to a deadly explosion at their offices in London, England.  Sam is the only one to believe that Lucy is an innocent victim.

I listened to the audio book version of this novel and was captivated from the first minutes.  The book is full with a wonderful assortment of characters.  Where does Mila come from all of a sudden and for whom does she work.  I loathed Piet from the moment he was introduced, yet I couldn't have imagined a more effective bad guy.  Even the minor characters, such as the bar managers are more than I expected.  Along with these cast, is a story with totally unexpected twists.  Each time I thought that a big reveal, or a resolution was going to be unveiled, the story just dug in deeper.    As with the parkour running, this story also covered a lot of physical ground: London, a hidden CIA prison, the United States, Holland and a few more sites.  Author Jeff Abbott made me feel as though I was in each of those locations along with Sam.  I was ducking and weaving with him as he tried to avoid capture on the freighter.

I enjoyed this book so much that several times I found myself sitting in my car in my darkened garage listening for a 'few more minutes'.

Thanks to Hachette Book Group for the use of the cover image and for my review disks.
Posted by Heather at 08:00

To be sitting in the dark, listening for just a few minutes more is high praise indeed. i'll keep an eye out for this one at the library, thanks for the recommendation

I love your review, what a great analogy. I love parkour,it's so cool. I'm adding the to my TBR list today.

It does look like it would be a fascinating book. I enjoy Jeff Abbott and think I'll try this.
Thanks for the good review.
Mike