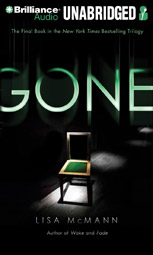 Janie is now finished high school and has some major decisions to make.  Continue as she has, dreaming other peoples dreams which destroy her body, leave Cabel and live in isolation, and what about her mother.  To help them both unwind from their work with the police, Cabel takes her to visit with his brother for a week.  In the middle of the week, Carrie calls and leaves frantic messages for Janie that result in the two rushing back home to sort out whatever is happening.

First, I want to say that I enjoyed the whole series.  I liked the reader Ellen Grafton and would listen to more of her work.  She made the characters come alive.  Particularly liked her no-nonsense voicing of Captain Komisky, my favourite character in the series.  What I didn't like as much is that Janie is so certain that it is Cabel or no one.  That this is her one relationship and that if she cuts ties with him, she'll be alone for the rest of her life.  Though, that does seem to be a very teen way of thinking.

Sure, it's pretty far fetched that you can enter other people's dreams, but imagine the possibilities....  The whole series was fun to listen to and I would recommend it to teens and parents of teens as it does a good job of looking at some of the issues and decisions facing young adults.

I listened to the unabridged version from Brilliance Audio, 4 hours 43 minutes.  Read by Ellen Grafton.

Also reviewed by Sara at Along for the Ride.

Thanks to Brilliance Audio for the use of the cover image.
Posted by Heather at 11:54

I like the idea of this book. The whole theme of entering peoples dreams. Sounds like a good series.