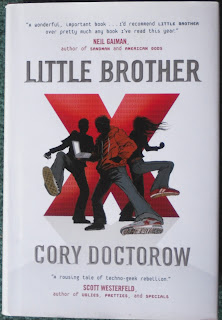 It was going to be fun solving the next clue in Harajuku Fun Madness.  Marcus, known online as w1n5t0n(Winston), met up with his friends in the San Francisco neighbourhood called the Tenderloin.  They were zeroing in on the game location when a series of blasts shook the area. While pushing their way through the crowd at the subway station, Darryl, one of the friends, is stabbed.   They go back to the surface to seek help.  When Marcus finally manages to flag down a passing vehicle, that's when his troubles really begin.

The Department of Homeland Security mobilizes instantly after the explosions.  This can't be a bad thing, as they were set up to protect American interests, and what could be more American than it's citizens.  Marcus quickly learns that at least some of their employees can be very vindictive, even towards those very Americans.

Much of this story unfolds through the use of technology.  Yes, there are laptops and cell phones, after all, it is the rare teenager that is caught without his or her accessories.  It was the use of the hacked Xbox Universal and Paranoid Linux that really got 'things' moving.   I totally enjoyed the discussions of cryptography and personal and public keys.  I had previously heard of key signing parties in business (persons flying in from around the globe to sign) but not for private correspondence.  Now if I could just find me a fashionable Faraday pouch I'd be set, or is that secure.

My favourite scene in the book had to be the vamp mob.  I can imagine the frenzy of a rush hour crowd being caught up with a thousand or more teens dressed as vampires yelling "bite, bite, bite, bite, bite."

My overall take on this book: America all started out playing a cooperative game, the objective being a country where all could live safely, freely and be happy.  After the attack on the the bridge, the DHS became an aggressor.  Each time DHS's control slipped, they cheated at the game and changed the rules.  The only way the citizens could achieve their objective was to play the game with a different approach.  No longer could they play to win, but they had to play to thwart this new opponent so he couldn't win.  The average citizen had to play the game such that they could make the cheaters rules work against them.

I listened to the unabridged audio version of this book.  It was read by Kirby Heyborne.  11 hours 54 minutes.  From Listening Library at Random House.  After finishing listening, I ordered two hardbound copies, one for my bookshelf and one to lend.  I then listened to the complete audio book for a second time.

Be sure to check out author Cory Doctorow's site for information on his other works.

Do you think the technology will render the book obsolete before its time?