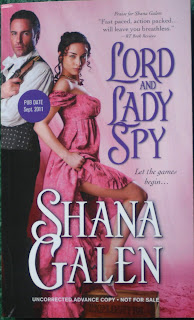 Napoleon Bonaparte has been exiled and the war is over.  England is recalling her spies and sending them home.  Not all those newly un-employed spies are happy about this change of fortunes.  The Saint doesn't want to go back to her mundane wifely duties.  She much prefers the sophisticated, stylish woman of the world she is when on a case.  Well, life can't be all that bad at home, if only her husband weren't such a bore.
Agent Wolfe would like nothing better to be at home in his wife's arms, if only she would open them to him or even talk to him.  He'd much rather be in Europe chasing down England's enemies.
You can tell where this is going.  Agent Saint and Agent Wolfe, un-known to each other, are actually Lord Adrian and Lady Sophia Smythe.  I totally enjoyed the scene where the two agents meet for the first time.   It reminded me of the movie Mr. & Mrs. Smith, only in this case, both spies work for the same agency.  They are both proud of the work they have done and are not ready to let go of their careers.  I could visualize them during the scene when they are comparing their scars, the number of times they were shot and various dangerous cases.
I found it amusing that with a total change of clothing, hair style and demeanor, that Sophia could transform herself to another women that her family wouldn't recognize.  Her husband and sister-in-law expected her to be that dowdy, mousy woman she had portrayed for years and they found it hard to recognize her outside of that 'costume'.  People see what they expect.
Two supporting characters that I particularly enjoyed are Agent Blue, who knows both of the Symthes, and their butler Wallace.  Wallace is the epitome of the perfect butler, nothing phases him, he maintains his composure no matter the unusual doings of his employers.  I'd love to see him in a future book should Ms. Galen write a follow up to Lord and Lady Spy.
Spy book - Romance novel, it doesn't matter, I found this a refreshing scenario.  Unlike many romances, right from the beginning they both admitted to themselves that they were attracted to the other.  Like many romances, mis-communications or lack of communications led to the estrangement of the two.  It was fun to follow the story and find how they would resolve their difficulties.  I would definitely read further works by Shana Galen.
Author Shana Galen's website
Thanks to Sourcebooks for my review copy.  At the time of writing this review, the  ebook is on a special  for $2.99 at a variety of retailers.
Posted by Heather at 08:00