Peter Nimble and his Fantastic Eyes by Jonathan Auxier 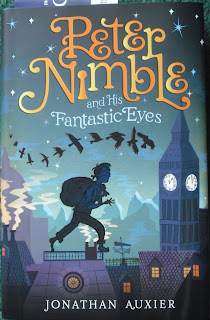 From the time he was a tiny baby, Peter Nimble has had to fend for himself.  He found a stray cat from which to nurse and when he was a few months old he learned to steal to feed and clothe himself.  This may sound impossible, but then you don't know Peter like I have gotten to know him.  He is a most capable ten year old boy.  Even though he is blind, he is the greatest thief in all the lands.  He can open any lock, sneak into any building and steal food from your own dish.

One day he is faced with a most challenging situation.  He is asked, as a favour, if he would guard a carriage secured with the most cunning assortment of locks.  Being true to his nature, Peter can't help but pick all the locks  and steal the most wonderful of treasures.  When he tries to use this treasure he becomes ensnared in a magic he has never even imagined possible.  This is the start of an adventure that will take Peter to the ends of the earth and places far beyond.

From the very first pages, reading about an infant who found his own wet nurse/cat, I loved this book.  If life had let me, I would have read it in one sitting, which I suspect many children will try to do.  Should you be wise enough to choose to purchase this book for your child, be sure to remove it from him or her at bed time, or remove the bulbs from their lights as they will not be able to put it down.  When your child tells  you of the Vanished Kingdom, don't say it doesn't exist, as it might have been magically added to your atlas when you weren't looking.

Peter is such an unlikely hero. He was abandoned at birth, blinded by ravens and left to fend on his own as an infant.  Not really hero stuff.  But he is good at what he does, thieving.  Somehow, with all these strikes against him, he is a most lovable character.  Not the kind that makes you want to cuddle and hug him, but the kind that you want to sit down and have a serious discussion with, treat him like and equal.

This story has all the makings of a wonderful adventure: unlikely hero, fumbling sidekick, children in need of a hero and magic, and it delivers many times over.  Once the action begins, it doesn't stop.  You and your child will enjoy it right to the final word.  This is a debut novel by author Jonathan Auxier.

Thanks to Penguin Books for my review copy. 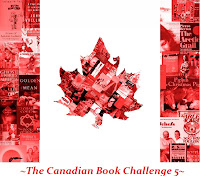 This is my 11th novel for the 5th Canadian Book Challenge, which is hosted by John at The Book Mine Set.  You are invited to join in the fun.  Read 13 books by Canadian authors, ones for each province and territory, between July 1,  2011 and July 1, 2012.
Posted by Heather at 08:00

Oh, I absolutely loved this book too! I don't think it's getting anywhere near the publicity it should have. I sure hope it makes some award lists!