Cloyne Court by Dodie Katague - Enter to win a copy 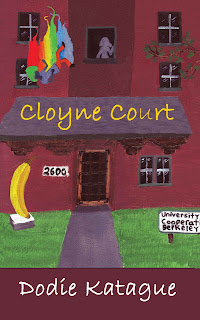 Derek Marston enrolled at the University of Calfornia Berkeley to get and education, he then moved into Cloyne Court Co-op to avoid a lengthy commute and because it was a cheap alternative to 'residence'. He did graduate from the university but it was the education he received  at Clayne Court that helped form the adult he was becoming and the course his life would follow.
Author Dodie Katague lived at co-ed Cloyne Court during the years 1977- 1979. In his opening, he tells the reader that 75% of this memoir is based on fact and the other 25% was added "for plot purposes."

Living in a co-op is a unique experience. As Derek found out, the residents set the rules of the residence and are responsible for it's daily operations. You want your room cleaned, then you clean it. When the common areas are dirty, you'd better hope that those with that job task get it done. There are no hired cleaning staff. Members also have to learn to deal with personality, culture and political clashes. There is no hired ombudsman to adjudicate. At the same time as the co-op members are dealing with their living arrangements, they also have to attend lectures and complete their assignments and study. More pressure than living in an official residence, though with the added benefit of learning how to live with a wide variety of 'roommates'.

Right from his first day, when Derek accidentally sits in on the Sunday night women's group and ends up explaining how he pleases a woman even though he has not yet 'been with a woman', he is thrust into an endless series of new situations. Co-ed showers. Ttemptations (sex, drugs, rock and roll).  Politics/social causes. Religion/cults.  Sort of a trial by fire situation.  There are no notes that you can read that will prepare you for every possible situation you will encounter when you first attend college/university.  You have to be flexible and open to new experiences.

I lived in a student run co-op during my university years. Waterloo Co-operative Residence Inc.  Reading this book was a trip down memory lane.  Much of what Dodie related, fit right in with my actual experiences.  Sure, there were some differences, we didn't have co-ed showers, but the relationships and the day to day functioning of the co-op was very much the same.  There was that very close inter-play between the residents.  Even if you weren't friends with everyone, you did become dependent on them pulling their weight and completing their tasks.  More importantly, the well being of all was dependent on the group functioning as a 'family'.  Just as Derek experienced, you lived with these people day in and day out and you needed to be able to deal with them or you would be miserable.  Along with his other building mates, Derek found out that they all needed to be more than people living in a co-op. they had to learn how to become a community.

To be entered to win a copy of Cloyne Court:, you must leave a comment and tell me where you lived when you attended college/university and at which school.  If you didn't attend, tell me something interesting about where you live now.  International entries are welcome.  There will be one winner.  If the winner is from Canada or the United States, then he or she can select either a paper or ebook version.  If the winner is international, then a coupon for a free ecopy from Smashwords.com will be provided by the author.  Contest closes December 12, 2011 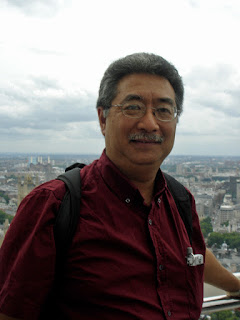 Thanks to author Dodie Katague and Premiere Virtual Author Book Tours for my review copy.

To learn more about Cloyne Court, visit Berkeley Heritage.  ﻿
There is lots of information on the web about co-operative living, you could start at this wikipedia article about student co-ops, though it is missing information on Canada.   For Canada, you can visit The Co-operative Housing Federation of Canada.
Posted by Heather at 08:00

I'm glad you enjoyed it. My dorm living days in college in the early 80's were much tamer.

I lived in the Waterloo Cooperative residence in Waterloo Ontario Canada and must say that a lot of interesting things happened there and if any of us had the fore thought to have written stuff down we probably would have had a bestseller on our hands.

I would love to win a print copy of this book.
I went to high school in Hamilton, Ontario and went to Bishop Ryan High school.