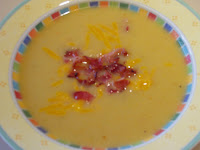 Soup, soup, soup. I can't get enough terrific soup recipes.  Almost every week for the past few months I have been making a pot of soup for my dad using the freshest ingredients.  My dad eats soup at least once a day and his kidney doctor told him he's not allowed to eat anymore canned soup.  Too much sodium.  In September, my dad was diagnosed with Multiple Myeloma, a cancer of the blood.  By the time he was diagnosed, his kidneys were seriously comprimised.  He also has additional health issues that will benefit from comsuming less sodium. 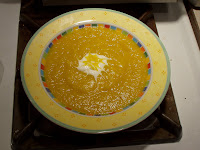 Now that dad is feeling somewhat better, I thought it would be fun to present both of them with a binder of pre-tested soup recipes from family and friends. 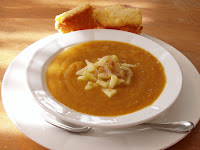 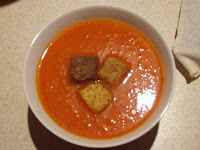 Below are links to some of the soup recipes I have posted on my blog:
Caribbean Pepper Pot Soup
Mediterranean Beef Barley Stew (it becomes soup if you put in less barley)
Leek and Potato Soup 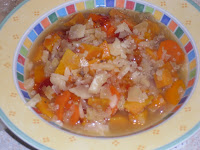 Do you have a soup recipe that you love.  Enter it below in Mr. Linky. For name, put the name of the soup, followed by your name: ie: Potato and Leek, Heather.  It doesn't have to be a recent post.  If you don't generally put recipes on your blog, please send me a private email  at (heatherdpear at hotmail dot com) with the recipe attached.  I'll leave Mr. Linky open for at least two weeks.  Be sure to leave a comment as I will be printing those out and passing them along to my parents.
I will be printing out all the recipes and putting them in a binder for easy usage.  In case you are wondering, the only ingredient that dad doesn't like is red and green peppers. Thank-you for your help with this project.
Posted by Heather at 16:02

Thanks for those soup tips. I like them. My husband loves soup and could eat it every day. I'm just learning to like it and really depends on the soup.

I might have another recipe or two around here that I could forward to you (or add here). Again, I'll have to type it up first.

I hope your parents (and you) enjoy all of the soups.

I added another soup recipes that I posted last Sunday. It is an easy kohlrabi soup. Next Sunday I am planning to post a Sunchoke soup.

I linked up an easy tomato basil soup.

I love soup, and added a few favorites to your link! Saving the ones you posted, they look so good.

Huh--might have to dig through my posts to see if I have any others (other than the recipe I posted today). We love soup at our house but they can be loaded with sodium--even the homemade variety.

Thanks for your tip on freezing and potatoes. I'm just starting to experiment with freezing soups and also realized that noodles become pure mush. In the future I'll just freeze the soup and add noodles when I reheat.

Best wishes to your dad.

Hi Heather,
I'm so sorry to hear about your dad's illnesses. I'm glad to hear he's been feeling better. I hope he continues to improve and feel well! xo

I have become a HUGE soup snob over the years and very, very rarely buy canned soup. In fact, the only commercially prepared soups I buy are the low fat low sodium lentil soup from Trader Joe's [canned] and the Imagine brand of creamy tomato soup [organic, dairy free and sold in a carton].

I have come to absolutely love the process of making homemade soup and in fact, eating soup I made myself just makes the experience more like a ritual--not just a meal. Okay, now I'm sounding really corny. LOL.

I will link up some of my soup recipes that I've posted, including one I just posted yesterday for Weekend Cooking. :)

Just what we need now it is trying its best to snow here in the north east of England. Frightening the things that get added to tinned soups, here sugar (yes, sugar would you believe it?) is a concern. Hoping your dad is doing well, thanks for the recipes.

Thank-you everyone for the wonderful recipes. I am in the process of printing them out and adding a few notes about veggies that I am not familiar with.

Today I added links to two unique sounding soups from the Ace Bakery in Toronto Ontario. I haven't been there, though I reviewed one of their cookbooks and the recipes I tried turned out perfect. I am looking forward to trying these soups soon.

Thanks for inviting me to link up! There are a lot of awesome recipes here. I hope you and your Dad find something you like here! :)

My winter favorite is Tortilla Soup and the recipe is here

I'm sorry to hear about your dad's illness. When I was a senior in high school, I used to leave school early to go to my job. Before I went to work, my dad and I would have 'soup & sandwich'. Dad and I still joke about it, but they were good times together. Thanks for reminding of that, and for this terrific post.

I'm going to check out all of these soups- my husband is on a soup kick too!

This is a message from a co-worker of my sister. I am adding here as I don't want to forget to print it out.

"Best wishes to you Nancy. I make a lot of soup but just wing it ya know? Anyways, I just want to share a great seasoning that I use now that doesn’t have msg in it(my husband suffers from gout which affects kidneys and joints…msg is a no no)..Its found in the organic section of super store & looks like a knor size box but is organic cubes you can add to any soup. Just sharing….I also add left over sweet potato or squash to give it flavor, texture and great taste(without msg)…

All the best to you and yours Nancy"

Hello: All the kind words that have been expressed are greatly appreciated. The wonderful soup recipes that Heather will bring to us will be used and treasured as they are from friends not met yet.

I added a link to two more from the Dec. 10 weekend cooking meme (Peggy Ann's blog)

This is really a great read for me. Thank you for publishing articles having a great insight stimulates me to check more often for new write ups. Keep posting!