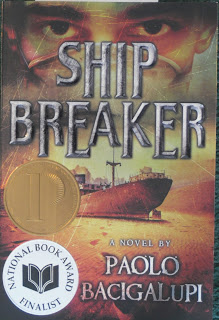 Life has not shown a kind hand to Nailer.  As a teenage boy, he is lucky to be of slight build as that means he can still work the light salvage crew.  Every day he crawls through the small air ducts and passages on grounded oil tankers removing any wiring he can get his hands on.  It's a physically demanding job and the only people he can rely on are his crew.

Nailer has to make a choice when he discovers a wrecked clipper ship loaded with a kings wealth of salvage.  All of it could be his, if only he kills the lone survivor.

This book, Ship Breaker by Paolo Bacigalupi, was chosen as the February read for my local bookclub.  We are a group of women who enjoy science fiction.  This selection was a bit of a stretch for some of the members.  Foremost, few of them are readers of YA fiction.  They wanted more back ground information about how the world came to be the way it is and a wider world view of how it functions now.  These aren't things that concern teen readers that I know.  They seem to be content to accept the world as the author presents it; they want to get on with the plot.  We were all interested in the chasm between the extremely elite life of 'the survivor' and the day to day existance of Nailer and his crew.  Was it really possible that 'the survivor' could know so little of the real world that provides the raw resources for her business and lifestyle.

We all agreed that we wanted to know more about the half-man Tool and his kind.  How did they come into existance and why are they so loyal to their master.Several of us stated that we'd be looking forward to the companion book The Drowned Cities, due out spring 2012, which further explores these questions.

One of the members told us that at her daughter's school,  this book is very popular with middle teen boys.  Nailer is a good role model for teen boys, he has to make some difficult decisions and can't rely on his experiences with his brutal father for guidance.  He has to consider what he has learned from the various people who surround him, take the best and forge his own morals.
Posted by Heather at 09:03

Thanks for mentioning this as a book that might well appeal to teenage boys, I'll be sure to tell my friends about it.