The Cypress House by Michael Koryta

Without a doubt, Tate McGrath is the most loathsome character I have ever met within the confines of a book.  He is very comfortable lurking in the tangles of the mangrove swaps of Corrider County, Florida.  Arlen Wagner never imagined that he would have to go head to head with a man of such ilk. 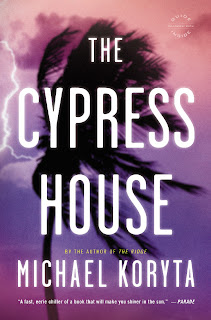 Arlen and his young travelling companion, Paul Brickhill, had planned to continue on to the Florida Keys to seek work on the planned highway  linking the Keys. Instead, they dis-embarked after Arlen saw a most frightful image of all the men on the train as walking skeletons.  He had seen this during the war, and in every instance, that man died. He wasn't going to  let himself and Paul die if he could prevent it.


This string of events eventually led to Arlen and Paul staying at the Cypress House Inn and boarding house in Corrider Country.  A country where Judge Solomon Wade has a finger in every thing that happens and even further reaching ties.   With the help of the local Sheriff, it isn't long before Wade has threatened Arlen and made it clear that it would be best if he minded his own buisness and left town.


I listened to the audio version of this book.  11 hours 51 minutes.  Robert Petkoff did a wonderful job of narrating.  HIs portrayal of  the women characters was excellent, which I've found is difficult for some male readers, though Robert is probably the best I have listened to so far.  There were also some unique sound effects that greatly enhanced the spookiest scenes in the book.

During first couple of chapters I will admit to feeling a bit lost.  I am not familiar with this time period, approximately 1935, nor am I familiar with any area of Florida.  I decided to keep listening and was slowly pulled deeper and deeper into the story.  I needed to learn more about Arlen's past and why he was travelling with Paul, a man half his age.  Even more, I had to learn why Rebecca was keeping the Cypress House running when it was obvious that there was no business to speak of.  At the same time, I experienced an edgy uncomfortable feeling.  I knew there was something wrong, but had no idea what.  Whenever McGrath was mentioned I would cringe,tuck up my shoulders and pull in my hands (bad when driving).  Rebecca was too complacent, she wasn't relaxed, more accepting that this was her fate and she had to bide her time. Why?

I'm glad I stuck with this book as I ended up really enjoying it.   I will be looking for more books by Michael Koryta and further audio books read by Robert Petkoff.

Thank-you to Hachette Audio for the use of the cover image.
Posted by Heather at 08:00

I envy you. You make the time to read and I have been trying to finish a book for a month and a half. I wish I could find that perfect balance again.

Great review. I mainly read novels. But occasionally I dip into non-fiction. The best book I have read for years is by a doctor called Atul Gawande. The title is Better. I did a post about it. http://caroleschatter.blogspot.co.nz/2011/11/better-by-atul-gawande.html