The Second Time We Met by Leila Cobo 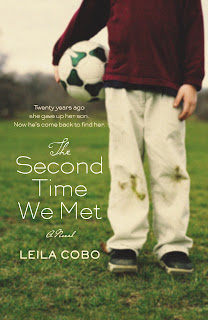 There was one line in this book that stopped me warm.  No, I don't mean cold, I mean warm, it made me feel warm and a bit stunned.  Rita was in confession and was stuck over the words she had to tell the priest.  I had expected that he was going to say something tough to her, her already knew from Rita's mother that she was pregnant, instead he told her "We don't judge in the house of God."  Wow.  I had to stop reading at that point.  For me this was a new view of the Catholic church.  This was the compassion that I wish I had expected. From that point forward, something shifted in my regard to this book.  I was already totally involved with young Rita and her plight, but now, it was something more. (I'm tearing up now trying to put in words how this impacted me, but I can't seem to).

It is 1989 and Rita  lives in a remote mountain town in Colombia.  Guerrilla forces have recently taken control of the 'safety' of the town and it's citizens, as long as they volunteer to pay the guerrillas.  Rita has done the un-forgivable and become involved with one of the guerrillas. Father Pablo is the priest who uttered those words that so affected me. He finds help for Rita and the baby.

Asher Sebastian Stone is that baby, and he has grown to a young man living with his Jewish family in California.  After a devastating accident, he is left adrift and looking for a new path for his life.  That is when he decides that he is going to make one more attempt to find his birth mother.

One of the things that struck me again and again in this book, was how the main characters perceived others opinions of them.  Rita thought that others would look down on her, knowing what she had done, yet time and again they surprised her and treated her very well. Asher was concerned how his team mates would respond to him after his accident, yet when he attended his first game during his recovery they showed him and the entire stadium that they were 100 percent in support of him.

This whole story seemed so plausible to me.  Yes, I know it would be hard to track down a birth mother in a foreign country, but not impossible.  Would strangers go out of their way to help, I would and I expect that at least of few of the people who read this review will answer that they would help a stranger.

This is a story that is going to stay with me a long time.  There is something about Asher that had me rooting in his corner.  Not that he was injured, but that he was accepting.  This accident happened, but not on purpose to destroy him. It just happened. Time to get on with his life and answer this outstanding question.  There are no whistles and bells in this story, no magic, just an assortment of true to life people that I would want to find in my life.

Thanks to Grand Central Publishing for my review copy and for use of the cover image.

So Many Precious Books, So Little Time
Posted by Heather at 08:00

Wow, I love a book that embraces your heart and sticks in your mind long after turning the last page. This sounds like an amazing book that I will need to check out. Maybe a good book club selection! Thanks for the review.

Wow, I haven't heard of this book but now I really want to read it. It sounds so good.

good to read of a book that struck you warm, it sounds like you were on to a winner with this one.

this looks like an interesting book heather hope it gets to uk at some point ,all the best stu