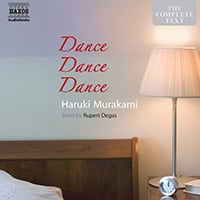 Most of the time, when I start to read or to listen to a book, I have a number of expectation of what the story will be about and how it might proceed.  I have learned not to do this with books by Haruki Murakami.  I selected this book based on having enjoyed The Wind-up Bird Chronicles, and decided I would just go with the flow and let the story reveal itself to me as I listened.

That is exactly what happened.  Murakami slowly peeled back the layers of the story exposing characters and twists that I couldn't have anticipated.  The narrator is a 30 something freelance writer.  We find that he is going through the motions of living life; he lives each day, but doesn't really experience any of it. Just a taste here and there just as with the restaurant reviews he write.  He'll order a vast assortment of delectable dishes, but only take a bite from each.  His job is very much like this as well.  He is a free lance writer who accepts pretty well every job that comes his way.  He allows the jobs to direct the course of his life.  The experiences that he tastes are all the result of these random jobs.

A continuing series of dreams about a run down hotel he once stayed in draws him back to Sapporo to the Dolphin Hotel.  The old dump has been replaced by a modern steel and glass construction, though the essence of the old hotel remains.  It is here that the narrator connects with the sheep man, who becomes his guide in moving him along the path to really living, to learning how to dance.

He is further aided along his journey by an unusual assortment of companions.  Thirteen your old Yuki has been abandoned in Sapporo by her photographer mother and needs and escort back to Tokyo.  I've already mentioned the fast talking sheep man.  The one armed poet in Hawaii stops our narrator and sets him to wondering how how much that has changed/affected the poet's life.  Then there is Gotunda, a former classmate of his who keeps popping back into his life via the movies that he has acted in.  I'm still wondering if the narrator has a man-crush on Gotunda.

Rupert Degas was the reader for this story. He does a wonderful job of portraying all the characters.  I particularly liked his voicing of the sheep man with his almost none pause speaking.  When he spoke for Yuki, I was convinced that I was hearing a thirteen year old girl.  Unabridged 12 hours 45 minutes.

Note: Since I listened to the audio book, the mis-spelling of any of the character names is my fault, corrections are appreciated.

Thanks to Naxos Audio Books for the use of the cover image.
Posted by Heather at 08:00

I haven't read any of Murakami's books yet, though I have 1Q84 on my shelf. There's something about him that makes me nervous. Maybe I need to listen to him first.

I've read three of Murakami's books and enjoyed all of them, especially The Wind-Up Bird Chronicles. I haven't read this one yet, but it sounds like it'll be another great read.

I really must try on of his on audio book maybe this one as it one few I ve not read ,all the best stu