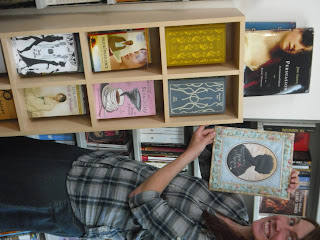 Jane and I have been having quite the ongoing conversation.  She confided that she had not really thought whether future generations would enjoy her stories.  I tried to re-assure her that they are still widely enjoyed, but she was reluctant to believe me.

This would require a road trip.   She was quite comfortable riding in my horseless carriage; she did feel that a red car is most bold.  Off we went to Wordsworth Books in Waterloo, Ontario.  The staff was kind enough to show Jane around the store particularly to the shelf where they had displayed all of her books.  Jane was most enamored with the cloth bound volumes and wished that she had a means of taking them with her on her travels.  Perhaps she'll be able to return for a longer visit during the summer. 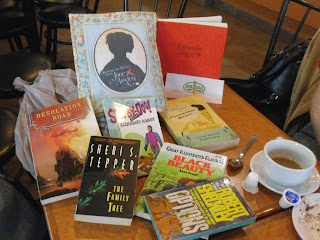 After leaving the book shop, we continued on our travels to a local Bookcrossing meeting at Nova Era Bakery in Kitchener, Ontario.  Jane hadn't heard of Bookcrossing and was amazed to learn that people would willing give away their precious books.  She was speechless when I told her that the members have registered over thirty thousand copies of her books in many different languages.

After a stroll along King Street, Jane was feeling a bit overwhelmed and asked for an early evening.  I have planned a few other outings for Jane before she travels to Quilt Canada and will be posting about them here.﻿
Posted by Heather at 11:09

I'm very disappointed I couldn't make the BookCrossing meeting this month. I would have loved to see Jane. She looks great in the photo.

I love this post. I hope Jane has many more travels and enjoys them all.

Jane is lookin' good! I'm hoping there will be a Dear Jane sampler quilt at Quilt Canada. Great photo op!