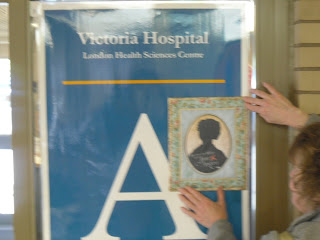 Jane had a busy week.  She travelled around with me and found it quite enlightening.  There were so many things she had never imagined would become reality.  Even though she's been in my car on many occasions, it still amazes her how quickly the miles pass.

When I told her we'd be going to London for several days, she was quite excited.  I then explained to her that it wasn't the London she was imagining, rather a new London founded 1826 in the Canadian province of Ontario.  She was eager to see this new city, so off we went. 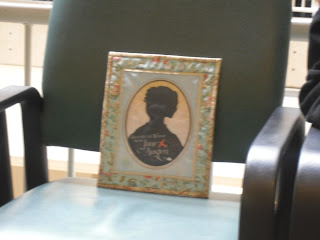 We spent the evening with my parents and bright early the next morning took them to the London Regional Cancer Centre located at Victoria Hospital.  Jane told me that she had never imagined that medical treatments would advance so quickly.  She had many questions about treatments for plague, the morbid sore throat and also tooth pulling.

She sat with my dad while he explained chemotherapy.  Dad declined to have his photo taken, but Jane felt it was an honour to be able to visit such an esteemed hospital that could treat these illnesses. 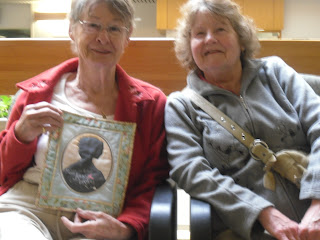 My mom (on the right) and her friend Noreen were pleased to visit with Jane. 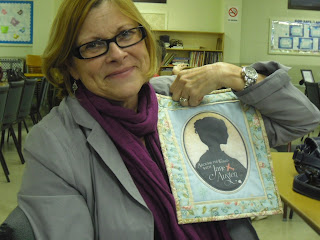 Later that evening my mother invited the two of us to attend a meeting of the London Friendship Quilt Guild.  I don't know if Jane was a quilter, but she was interested in learning more about this art.  I lost track of her for a while.  She was making her way around the room chatting with various members.  When I caught up with her, she was talking with fellow author and quilter Barbara Haworth-Attard.  I suspect they were sharing author secrets as they were hugging and laughing when I reached them.  While we were driving back to my mom's after the meeting ended, Jane asked if I would get her a copy of one or two of Barb's books as they sounded very much like works she would enjoy.


Yes, Jane was a quilter.  She worked on pieces with her sisters and mother.  We checked on the Internet, a marvelous service according to Jane, and found that at least one of their quilts has been preserved at the Chawton House Museum.  You can view and image of the quilt at the website of the Jane Austen Society of Australia.

This is the first time that Jane has enjoyed 'Mother's Day'.  She said that she used to enjoy Mothering Sunday, which is a Christian practice dating from the 16th Century and is celebrated on the 4th Sunday of Lent.

Jane had several more adventures while in London which we will share with you in the next few days.﻿
Posted by Heather at 14:43

I enjoyed your writing so much. Sorry to hear about your dad.

how did I not know that Jane was a quilter? Though it does make me think of those GORGEOUS Dear Jane quilts--I will make one someday. I will.

I wasn't familiar with Mothering Sunday--it was fun to take this journey with you.

Glad to hear that Jane shared your Mother's Day activities. Hope all goes well with your Dad.