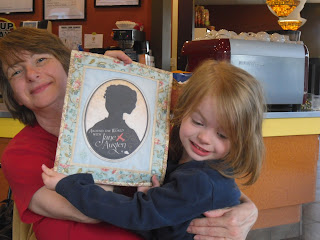 Over the past two weeks, I have had the most amazing conversations with Jane.  She is a terrific observer of people.  There were many changed she hadn't anticipated, such as indoor plumbing, horseless carriages, and computers, and others that she had hoped for antibiotics, chemotheraphy, and other medical advances.  What she had no idea of, was whether people themselves would change.  No they hadn't.  She was reassured to find that they were still the same types that she had noted over two hundred years ago.  They are selfish, kind, cunning and welcoming.  All those things she had noticed and written about, were still evident.

Jane very much enjoyed meeting my friends Audrey and her daughter Lily.  She could not have imagined a four year old already able to read.  wow.  Way to go Lily, who picked up the little quilt, looked at it a moment and read off Jane's name as though she had been reading it all her life. 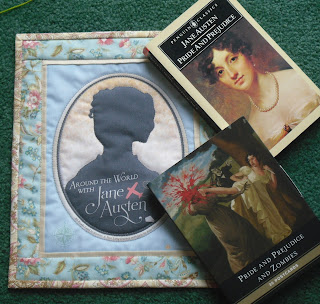 As I noted in a recent post, Jane was pleasently surprised to find that her books were still selling, and were regularly stocked in book stores.  she had never imagined that other authors would be interested in re-working her stories to keep the relevant to differing groups of readers.  One that held her attention was pride and Prejudice and Zombies by Seth Grahame-Smith.  She was particulary amused by the postcard book adapted from Seth's story.  Jane is determined to read his book, if only to find out how the ninjas fit into the story.  I recently hosted a contest to receive one of the postcards from this book.  The winner is Helen.  I have sent her a message.  Thanks to those who entered. 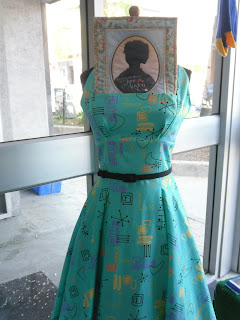 Knowing that it is almost time for Jane to travel to Halifax, she wanted to shop for a more appropriate dress.  She has been wearing the same clothing for almost 200 years and felt it was time for a wardrobe upgrade.  She was most interested in the new fabrics we are wearing and in a style that would not require layers of petticoats and foundations.  My daughter suggested that I take Jane to Delerium in Waterloo, one of her favourite dress shops.  The staff were most happy to welcome Jane and showed her several styles.  Jane chose this daring sleeveless sundress.  She is still a bit uncomfortable exposing her ankles, but feels that being so cool and comfortable at all times will help her overcome the  sense of impropriaty.

I'll be helping Jane pack today for her trip to Halifax.  It will be first air flight and she is both anxious and excited.  while there, Jane is hoping to meet up with Jane Stickle and view some variations of her famous Dear Jane Quilt.
Posted by Heather at 08:00

Great choice of dress Jane, I will miss you.

Lovely photo of Audrey and Lily with Jane!

Yes, we're still reading Jane's books. My 13-year-old and I rewatched the 6-hour BBC production of Pride and Prejudice recently, and she is now halfway through the novel. She was happy to discover she could download it directly to her tablet computer.

I just wanted to say that I received the Jane postcard today. Thank you very much! It is frightfully cool!