Vampirates: Demons of the Ocean by Justin Somper 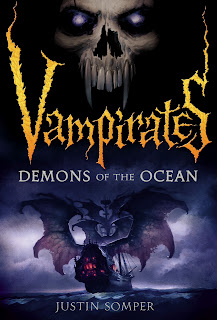 Pirates Rock.  I'm thinking of the classic swashbuckling, courteous pirate as portrayed by Johnny Depp.  This book abounds with just such characters as well as an assortment of the less savory type.

The time is 500 years in the future, somewhere off shore of Australia.  Piracy has gained a supremacy upon the sea and lighthouses are once again manned instead of housing an automated light.  When the lighthouse keeper at Crescent Moon Bay dies, his children, Grace and Connor, are left destitute and orphans.  Seeking to evade those do-gooders who want to care for them, they set to sea in their father's small boat.  A storm soon overtakes them and they are dumped in the sea when the boat overturns.

They are both rescued, though by different ships.  Pirate Mistress Cheng Li drags Connor aboard the pirate ship where she is the Deputy Captain.  As a recent graduate of the new Pirate School, she tries to introduce modern methods to the running of the Diablo.  Grace, on the other hand, is carried aboard a mysterious ship cloaked in mists.

As diverse as these ships are, both of the captains adhere to very clear sets of morals. They welcome the twins on to their ships and ensure their safety.  I found myself liking both captains.  Not all the sailors on the ships live by the same code, some of them are clearly much more blood thirsty.    The introduction of a pirate school sets the scene for continuing friction between the leadership on the pirate ship.

Grace and Connor were rescued by very different sailors.  Grace by a low status mid-shipman and Connor by a deputy captain.  Both are vigilant champions of those they have saved.  It will be interesting to see how these relationships develop throughout the next five books in this series.

This is an intriguing new twist on the classic pirate story.  It would be a good choice to read together with your pre-teen.

To learn more about author Justin  Somper and the Vampirates series, visit the dedicated Vampirates website.

Trailer for the Vampirates stage show.


Thanks to Hachette Book Group for use of the cover image.