The Color of Evil by Connie Corcoran Wilson 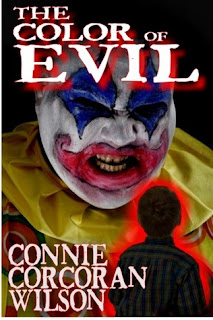 Hiding in plain sight.  In my opinion, that's what clowns do.  All that overt make-up and distracting clothing, but what are they hiding or hiding from.  Eight year old Tad really didn't care what was behind the make-up, he just knew he wasn't going anywhere near the clown that had been hired to entertain at his birthday party.  When Tad looked at the clown all he saw was a horrid gray-green aura, the worst possible color.  Every person that Tad looked at had an aura, most of them benign.

After the birthday party, Tad started having gruesome dreams.  For the next few weeks, he dreamed of Pogo the Clown committing the most evil acts.  Once the clown is arrested, Tad's dreams stopped, but the young boy was left in an almost catatonic state.   We next meet Tad, eight years later, and he is a seemingly well adjusted young man, a junior in high school.  He has continued to see aura, but he doesn't tell anyone about them.  He has found ways to live with what he knows about people.  At least that is the case until he meets and befriends Jenny.

When I read a horror story, I don't want to set it down until I turn the final page, and that is exactly what I did with this one.  By the time I reached the middle of the book, I knew I wouldn't sleep until I found out 'what happened'.  For the first few chapters I was distracted by the straight forward story telling and the repetition of some plot facts.  As the story continued and the story intensified, I found that those very same techniques kept me from getting too wound up.  The repetitions of the mundane parts of Tad's daily life were very reassuring that life was good and that he was safe from the guys with the 'bad' auras.  Each time I felt that I had a grip on the gruesome events, then author Connie Corcoran Wilson would throw in a twist which would put me on edge once again.  When I was one chapter from the end of the book, I thought everything was wound up and I would sleep fine, but then she used that final chapter to present those 'loose ends' that I had conveniently pushed to the side.  As I read those final paragraphs, I was once again forced to consider the evil and discomfort associated with those horrible colours.

Thanks to Virtual Author Book Tours for my review copy.  Visit  their website for more stops on the tour, including interviews and guest posts with author Connie Corcoran Wilson, and a several book give aways.
Posted by Heather at 08:00

Clowns creep me out!!! This is one book I would not pick out.

Thanks so much for taking part in the tour. I'm so glad you enjoyed the book so much!