Avice Brenner Cho is a member of the small human population that lives on a remote planet which is home to the Ariekei.  For years, the humans and the Ariekei have had  difficulties communicating with each other. Avice can understand some of what they say, but has not ability to speak their language.  When she is young, she is invited to provide the material for the development of a simile that is of great importance to the Ariekei.  This is her closest contact with her 'neighbours', though it brings her no closer to understanding them.  After years away, working as flight crew on a space going ship, she returns home with her linguist husband Scile.  While the two of them are drifting further apart in their relationship, he draws closer to an understanding of the unique language. 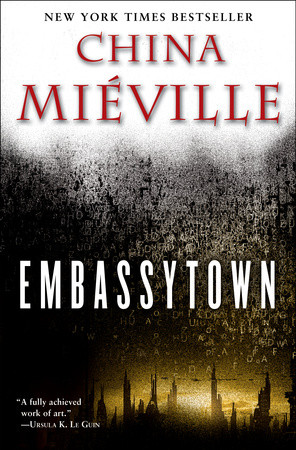 I read this book, or rather I read half of it, as it was a selection for my local book club.  I found it very un-readable.  There were far too many words that were not defined, but rather their meanings obliquely implied.   There were also lines and paragraphs from which I could discern no meaning, such as the following, "Immerse, into the immer, where the translations of their ungainly lines have purpose, and they're gestalts of which we're parts, each of us a function."

I do understand that language was a major barrier between the two dominant societies living on the planet, and I could certainly imagine their frustration of not being able to understand each other, but by making it so difficult for the reader to understand, Mr. Mieville totally lost me.  I did enjoy the story that was unfolding, but it was far to difficult to decode to be enjoyable.  I will admit that I was brought to tears by my frustration.  I have two honors degrees from a leading university, have read thousands of books, however, this book will not be among those that I have finished.

We had a lively discussion at our book club meeting and the language was a challenge to most of us.  I was told that it did become easier to understand once you got past the middle of the book (which is where I stopped reading).  I did enjoy the plot line that dealt with the impact of the humans and their ability to utter lies.

This book brought to mind a Star Trek Next Generation episode, "Darmok", where Picard was transported to a planet along with the captain of another ship.  The two species had been unable to understand each others' languages, and were forced to learn to communicate so that they could survive the challenges of the planet.

While I did not finish the book and found the language un-readable, there is a good story hidden inside.  If you have more patience than I, and you aren't bothered by loosely defined words, then give this book a chance, it shows a good understanding of developing communications and the impact of one society on another.

Thanks to Random House Inc. for the use of the cover image.
Posted by Heather at 16:22