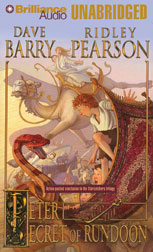 Peter and his lost boys are back in another rollicking adventure.  Mollusk Island has been attacked by a brutal band of warriors determined to vanquish the Mollusks and seize their treasures.  At the same time in the far away land of Rundoon, the Star Catchers are also under attack.

Somehow Lord Ombra has pulled himself together and he is holding nothing back in his assault on all that is light and good.

Molly, Lord Aster's daughter, and her neighbour George Darling, get themselves in all sorts of trouble, though in their defence, they are only trying to help.  In this third installment of the series, George finally shows that he has what it takes to become a good man.  Up until now, he mostly whined about Peter and Molly liking each other.  Now he shows his strength of character and his surprising intellectual skills at helping Molly out of her predicaments.

Any child reading this story would be excited by the presence of King Zarboff's gigantic snake Kundalini.  This snake is so huge that the King feeds him any person that displeases him.

While this is a great book to read with your child, there is enough action and detailed characters to keep adults interested.

I listened to the unabridged Brilliance Audio Book version that was read by Jim Dale.  Once again, Mr. Dale did a wonderful job of bringing these characters to life.  He has developed such appropriate voices for each of the many characters that it is hard to believe that he was not working with a full staff, rather than just himself.  10 hours 15 minutes.

Thank-you to Brilliance Audio for the use of the cover image.
Posted by Heather at 08:00