Murder on Ice: A Figure Skating Mystery by Alina Adams 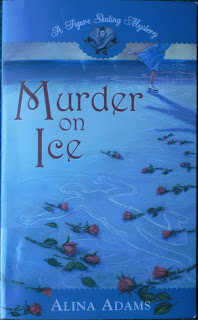 Cosy mysteries are such fun to read.  They are the perfect vacation book; I can pick them up, read a few pages, put them down, then pick them up again without losing my link to the plot.

I bought this one ages ago when my son was still involved in figure skating.  Once he got to high school it was seriously not cool for a boy to skate and jump around.  I put the book aside unread until I was packing my bags for our July vacation. I'm glad I finally got to reading it.

Rebecca 'Bex' Levy, has been hired as a figure skating researcher for a popular news network even though she has no skating experience.  She is a very competent researcher and has proven herself time and again during the previous seven months of the skating season.  Now at the world championship in San Francisco, her boss is calling on her once again to save their broadcast.  Bex thought that this would be nothing out of the normal, dealing with bickering co-hosts, frazzles nerves and hectic work hours, but then a seemingly controversial judging decision sets every one on edge.  To top it off, one of the judges is found dead in a room where she had no logical reason to be.  Bex can't accept that it was an accident but who would want to murder her, or better yet, it turns out, who wouldn't want to murder her.

I used to be a huge fan of figure skating and watched it at every chance.  I got dis-illusioned when it became obvious that there was some bias in the judging.  Too much talk about  the competitor 'paying his dues' before he could win gold, and the commentators saying that certain competitors wouldn't win because they had strayed from the 'ballet tradition' of figure skating.  Does this mean the fix was in even before any blades hit the ice?  Bex had to wonder the same thing after finding a note in the dead judges pocket.  (note: in the past few years there has been a major re-working of the judging in this sport eliminating any chance of 'fixing' the results)

This story explored the egos, insecurities and jealousy of the competitors, their families and their coaches.  Ms. Adams also kept me off balance by tossing in revealations that came totally out of the blue.  After each of those, I had to stop and re-think my whole grasp of what I thought had happened.

I enjoyed the writing of this mystery, but I didn't have the appreciation for it that I would have had back when I was an avid skating viewer.  Still, I would definitely read more by Alina Adams.

Bex and her figure skating associates continue with four more books in this series.

Update: be sure to read the comment from the author.  She has released enhanced ebooks in this series and they sound well worth their price.
Website for author Alina Adams
Posted by Heather at 10:43

Thank you so much for the review! I appreciate the kind words, especially from a skating fan (and former skating mom)!

My younger brother was a competitive ice-dancer, so I know all about what it's like to have a boy in the sport.

Last year, I got the rights back to all of my figure skating mysteries and have re-released them as enhanced e-books, with professional skating videos embedded as part of the story. Now you don't just have to read about what my characters are doing, you can actually see it!

All of the multimedia versions are available on Amazon and B&N. Check them out!

Nice review! I read this book some time ago and enjoyed it. I have the next one in the series in an enhanced-eBook form (whatever that means), but have yet to read it.

By the way, I added a link to my review to point to this one. ;)

I knew that owning a more than basic e-reader was a good idea... unfortunately, mine is just that :S

"I can pick them up, read a few pages, put them down, then pick them up again without losing my link to the plot." <- this is exactly why I like to read cosy mysteries after a "heavy" book. I didn't know about this book though!

Figure skating must be more manly than ballet, surely? Also, it's probably a great way to stay fit? Boo for peer pressure :/

This sounds like fun! I will have to try the enhanced e-book. I haven't read one of those before.

My kids used to figure-skate and I'm still a huge fan (even with subjective judging and all), so this sounds like a book I should check out sometime.

Great. How about linking in to Books You Loved: September? Have a great week!