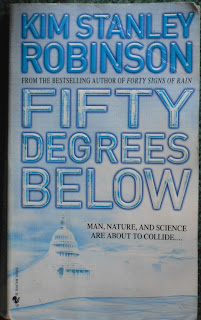 Global warming has become a reality.  Washington DC experience severe flooding, the Atlantic Gulf Stream has stalled and the Antarctic ice sheet is breaking up.  These are the calamities that Kim Stanley Robinson has unveiled in his 2006 novel Fifty Degrees Below.  In light of Hurricane Sandy a few weeks back, this story line doesn't seem too far fetched at all.

Scientist Frank Vanderwal is working with the NSF (National Science Foundation) to brainstorm and implement workable solutions the the global weather catastrophes.  At the same time, he has several personal challenges to meet.  First and foremost, he is homeless in DC and living in a tree fort in Rock Creek Park.  Since he is in the park, he has volunteered to help locate zoo animals who escaped or were released during the flooding.  He is also involved in a clandestine relationship with a mysterious woman named Caroline.  An additional and confusing interaction, is his relationship with the Tibetan/Khembalis delegation.

For the most part, I enjoyed the weather discussions in this story.  With the exception of one very extreme drop of temperatures in two minutes, most of those detailed seemed plausible. This is the part of the story that I really wanted, the events of the weather and it's effects on the various populations, unfortunately, this seemed to take a back seat to the political and social interactions.  Pages and pages of political machinations put me to sleep more than a few times.  The story could have proceeded without most of that drivel. Yes, it was important to acknowledge that the politics of the day played a part in either approving or delaying the NSF projects, but it made for very dry reading.  I also didn't need to read 2 1/2 pages of the vacuuming habits of one of Frank's friends.

It wasn't until I was finished the book, that I realized that this was the second part in a trilogy.  Don't know what I was missing in the back stories of the characters, but I won't be rushing out to buy either the first or third parts of the series,

I have a great love of weather related b movis I watch on sci fi channel maybe this book be one to get if I see it ,as you say you never know what can happen with the weather ,all the best stu