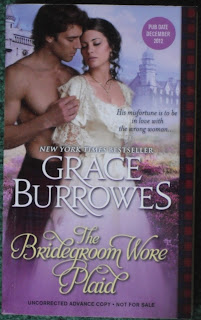 With the young Queen Victoria as a neighbour at Balmoral, Ian MacGregor and his family often played host to English families wishing to spend the summer experiencing 'everything Scottish'. It also didn't hurt that their paying 'guests' brought much needed cash.  This year was different.  Ian, Earl of Balfour, had determined to marry a very wealthy bride and once and for all put an end to their tenuous finances.

Baron Willard Daniels was equally determined to marry off his eldest daughter, Eugenia, for the highest title he could find.  This did not sit well with his daughter, who was determined to marry for love regardless of the bridegroom's social status.  Ian's two single brothers and their widowed sister are well equipped to house and entertain the Daniels,  but they weren't expecting to have to guard all of their hearts.
I love any story that has a man in a kilt.  It just can't do much wrong.  All the author has to do is describe him standing proudly in his plaid and I captivated.  Fortunately, author Grace Burrowes goes far beyond.  The MacGregor family has their share of challenges, the eldest brother long missing in distant Nova Scotia, Canada, famine and crop failure on their farms and have to cater to the whims of their haughty guests.
Eugenia Daniels has seen up close the horrors of her mother's marriage and is determined that this not happen to her.  She will not endure a loveless marriage.  Her brother Matthew is a disappointment to his father, but is determined to protect his sisters.  The two chaperons, widow Julia Redmond and niece Augusta Merrick, are anxious to procure a favourable match for their charge, but also want to enjoy their vacation.
This story was fun from the first pages.  A beautifully described setting, the lure of royal neighbours and a rambunctious redhead, Ian's young niece.  It truly read as two families trying to blend together, but not in the ways that might have been predicted.  Though it was only a small portion of the story, the inclusion of a scene with Albert, the Prince Consort, had me grinning and cheering him on.  Sorry no details, you will have to read the book.  Even if she didn't include a kilt clad highlander, I would definitely read further books by Grace Burrowes.