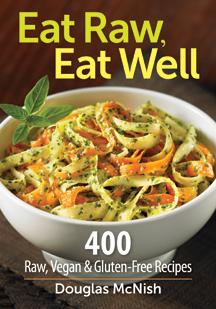 About two years ago, I first heard of  'raw food' and have been curious since then.  When I saw Eat Raw, Eat Well by Douglas McNish in the store, I had to bring it home and hopefully satisfy my yearnings.   Right off, I have to tell you that I wasn't disappointed and that Chef Doug exceeded my expectations in every area.  I found that each dish was a flavour adventure and that there is no reason for eating boring, flavourless foods when there are innovative chefs like Doug who are willing to share their well devised recipes.
A the beginning of the book is an introduction to raw foods including a section about eating raw in frigid weather.  (spiciness does help).  After a discussion of cooking techniques and kitchen tools, Dough launches in to the recipes.

I will admit, that I had a hard time getting past the breakfast and smoothies sections.  The "Sweet Green Drink" with kale, spinach and romaine could be part of my lunch every day and I'd never get tired of it.

﻿
As with all the recipes, there are substitutions suggested where appropriate.  This worked well with the smoothies as it made it easy to add in a fruit or vegetable that was available for one that was too pricey when I was shopping.﻿
﻿
What surprised me, is that most of the smoothies start with a base of a cup of almond milk.  Previously I would have used juice, but the almond milk, or other nut/seed milk, makes for a creamier and more whole bodied drink.﻿
The breakfast porridge were a nice change of manufactured cold cereals and a lot more filling.  They do take a bit of time to prepare, but not much longer than a pot of steel cut oatmeal.

My family did have a hard time accepting that soup didn't come to the table steaming hot.  I tried two soups, and both were very easy to make in the blender.  Pre-chopping or shredding the vegetables helps to make for a creamier soup.  I have a good quality Waring blender and it worked well, though a larger volume jug would be better.  Using raw butternut squash in soup took a little getting used to,  but once it was blended, I was able to overlook that.  Next time, I would use a little less curry powder in the "Butternut Squash and Mango Soup".  The soup wasn't actually cold, as the speed of the blender tends to generate a certain amount of heat.﻿
If you can think of a traditional spread or dip, Doug has included a vegan, raw version.  Hemp Avocado Mayonnaise, Cashew Spinach Dip, and several meatless pates.  The "Pumpkin Seed Chimichurri Dip" was full of flavour with a slightly grainy texture, (made in the food processor).  I had a hard time getting the dish away from hubby.  Most recipes have a side bar that contains tips of techniques such as how to soak pumpkin seeds.  Also included are nutritional information  about that particular recipe ie: why pumpkin seeds are so good for your body.  ﻿﻿﻿﻿﻿﻿﻿
﻿
Yes, you can make a filling main dish based on vegetables.  Seeds and nuts pureed in the sauce adds the protein that gives that lasting 'full' feeling.  Even though hubby was skeptical, he enjoyed both main dishes that I prepared.  The parsnip fettuccine had me totally fooled into thinking it was traditional pasta.  Marinating it in olive oil and lemon juice softened it and the colour fooled my brain as to what it really was.

The "Spicy Pad Thai" sauce was made with hemp seeds and a full teaspoon of cayenne pepper.  Served with the spiral cut zucchini it was  perfectly spicy, but spooned over traditional ravioli, it was a bit too spicy.  I made a half serving as I didn't think my family would be willing to give it a taste test, but they surprised me and ladeled it on.

No cookbook review would be complete without me delving into the dessert section.  I decided to keep it simple and try the "Chocolate Walnut Brownies".  Three simple ingredients: walnuts, cocoa powder and agave ( I used carob and honey).  They are chewy and full of flavour and would suit the sweet tooth cravings of any diner.  There are desserts in the book that are suitable for a fancy celebration: Chocolate Avocado Torte, Pumpkin Pie and Cashew Cheesecake (all gluten and dairy free) to name just a few.

I have already marked several more recipes for tasting and a few of these for repeat.

Thanks to Chef Doug for answering my enquiries as to buckwheat grouts.  They are a whole grout that has not been toasted.  Doug can be found on his Facebook Page and lives and cooks in Toronto, Ontario Canada. 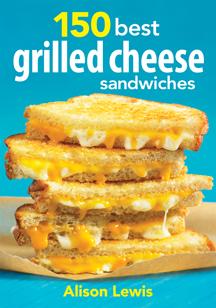 As part of my 1000th Post Celebration, Robert Rose Inc. has donated three copies of their latest cookbook: 150 best grilled cheese sandwiches by Alison Lewis.  Open to residents of Canada and the United States.  To enter, leave a comment telling me your favourite vegetable dish.  contest closes February 2, 2013. 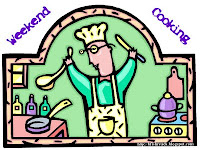 For more foodie fun, be sure to visit Beth Fish Reads for her Weekend Cooking Meme.  She invites you to add a link to your recent food related post.

For further information about spiral cutters, check my earlier post.
Thanks to Robert Rose Inc for the use of both cover images and for the donation of the prize copies of  150 best grilled cheese recipes.

Just by looking at your photos I can tell this is a winner of a book. I've been thinking about trying veggie smoothies instead of my usual fruit ones. We are big almond milk fans here; my husband is lactose intolerant and we use almond milk almost exclusively.

Oh my favorite veggie dish? I don't know. Anything with cooking greens of some sort. My latest craze is greens, beans, and pasta.

I love most vegetables and eat most of them with just a little pat of Becel. However, my latest favourite is roasted fennel topped with a some fresh parmesan cheese. The whole thing is then returned to the oven until the cheese melts. It's so yummy.

As much as I love grilled cheese sandwiches, I was a little disappointed that you weren't giving away the raw foods cookbook. All of your descriptions made the dishes sound terrific. Great review! I'll have to keep my eye out for this one.

I bet my son (vegan) and his wife (vegetarian)would LOVE Eat Raw, Eat Well! I think I may even like to try it.

Picking a favorite vegetable dish is hard because I love veggies. Two of my favorites are green beans, potatoes and corn cooked in a big pot with a little vegetable broth, salt & pepper. I also love marinated tomatoes, cucumbers and onions.

You have convinced me! I love veggies, but my favorite (almost typed vegorite

Sorry...let me finish my thought...hit publish too soon...my favorite is any kind of carrots, especially those right out of the warm ground in my garden.

Oh, my, it's hard for me to pick a favorite veggie dish...I do love the West African Groundnut Stew from the Moosewood, though. And almost anything else from them. Your soup and veggie dishes look yummy. Thanks for the chance!

My daughters have been making lots of green smoothies lately. The color kind of puts me off in the morning, but the rest of the photos and recipes look amazing. I think I NEED this book!

Wow, you tried a lot of recipes from that book -- all look interesting, healthy and yummy. I've yet to try any veggie smoothies but now I just might.


I probably wouldn't choose to eat raw 100% of the time, but we do eat a lot of raw or vegetable based dishes. Tonight we had pumpkin corn chowder, I believe it is vegan with a coconut milk creamy base. Anyway, it is tasty.

I'm in my veggie smoothie phase now, so I could find a lot of interesting recipes there! thanks for sharing

Rebecca @ The Key to the Gate said...

I have never considered switching to the Raw diet but I must admit, your photos make this food look very appetizing. I definitely want to try one of those smoothies! Thanks for sharing your review on the book. It looks like a good one to experiment with different food items that I would normally use in my cooking.
Rebecca @ The Key to the Gate

Just visited a raw food restaurant in NYC with my daughter last weekend, so I was intrigued by your review of the raw foods cookbook. My favorite vegetable dish is probably any vegetarian stir-fry, but plain old steamed asparagus or corn on the cob in season come in a close second!

I don't know if I would go totally raw, but some of those recipes and pictures are tempting! Almond milk works for many things, especially smoothies. I use for overnight oatmeal too :)

Raw food sounds challenging in winter. It could be a healthful project for warmer weather, though. Vegetable smoothies look like a good place to start.

I wouldn't have thought you could do all of that with raw foods. Cool.

And I'd love to be entered in your contest. My favorite vegetable dish is a huge amount of roasted vegetables (changes seasonally), with marinara sauce and a little pasta.

Almond milk - sounds interesting Heather. I have never noticed it in the supermarket - will have to look out for it. Hope you are having a good week.

I may have to purchase"Eat raw eat well" as your descriptions of the recipes made me hungry! LOL but we are off for sushi tonight so we'll have lots of raw food!

Sadly, I have to eat my vegies cooked, however, I love Grilled Cheese sandwiches.
I like nearly all cooked vegies, but if i had to pick a favourite it would be peas, picked fresh from the garden!

Sorry, but no matter what anyone says soup should be something eaten warm if not exactly hot.

Great post, Heather. Some of those smoothies look sooooo yummy.

The contest is now closed. Thank-you for you entry an vegetable comments. Winner to be announced shortly.

Yay, you reviewed a cookbook that I only just ordered :D I'm feeling hesitant to try the raw soups, but the "pasta" fettuccine is something I could start with. Loving the many photos!