First Nations Friday - The Shadows that Rush Past by Rachel A. Qitsualik 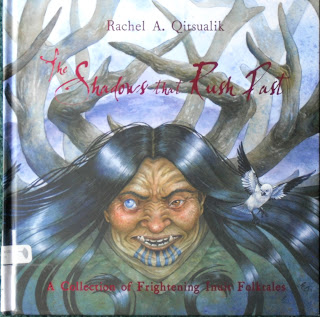 First Nations Friday is an occasional post that features books by Aboriginal authors.


Mythology plays a large role in many cultures around the world, it is no different with the Inuit of Canada.

In this book, author Rachel A. Qilsualik tells the story of four mythological creatures: Amautalik, Akhla, Nanurluk and Mahaha.  Each of these creatures is big and scary, some more human in appearance and some more animal.  Each is a threat to the neighbouring Inuit who must find a way to escape the threat to them or to defeat the beast.

These stories were totally unique to me.  They were not a typical 'feel good' tale where the strong man of the village goes out and easily slays the monster.  It took cunning and intelligence to be victorious.

The art work by Larry MacDougall and Emily Fiegenschuh brought these tales to life.  I spent as much time looking at the art work as I did reading the stories.

While I did enjoy these tales, I do think I would have enjoyed them more had I read them with a child.  A child who would have asked questions and made guesses about the nature of the creatures an how they would have defeated the beast.

This would appeal most to children ages 8-12.

This book is a nominee in the 2013 Ontario Library Association,  Forest of Reading program at the Silver Birch Non-fiction level.

Sounds good, thanks for the recommendation.

Although geared towards children, i enjoy reading stories from other cultures.